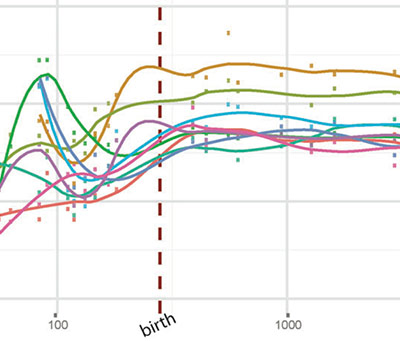 Brain boost: Levels of the protein ASTN2 spike in the prenatal brain and again around the time of birth, suggesting that it plays a role in development.

Mutations in two proteins, ASTN1 and ASTN2, that help guide neurons as they grow in the developing brain may be risk factors for autism, according to a study published 14 January in Human Molecular Genetics1.

These proteins help bind brain support cells called astroglia to developing neurons. In a 2011 study, researchers found duplications or deletions that encompass ASTN2 in 5 of nearly 600 people with autism or attention deficit hyperactivity disorder (ADHD) and none in more than 2,000 controls2.

In the new study, the same team looked for these deletions or duplications, known as copy number variations (CNVs), in nearly 90,000 people referred for genetic testing, including 64,000 diagnosed with a neurodevelopmental disorder. They found 3 CNVs (two deletions and one duplication) in ASTN1 and 58 CNVs (46 deletions and 12 duplications) in ASTN2.

The majority of the CNVs in ASTN2 are in the subgroup with neurodevelopmental disorders, with 12 in people with autism. Others are in people with ADHD, anxiety or language delay.

However, the researchers found that a group of 44,000 controls are just as likely to have the CNVs as people with neurodevelopmental disorders. They found 18 deletions and 5 duplications in ASTN2 and one deletion in ASTN1 in this group.

Deletions that disrupt the end of the ASTN2 gene, which regulates variants of the protein, are about four times more common in people with neurodevelopmental disorders than in controls. CNVs in this region are also three times more common in males than in females with neurodevelopmental disorders but show no gender bias in controls.

The researchers also looked at ASTN2 and ASTN1 in BrainSpan, an atlas of brain development that spans from 8 weeks post-conception to 40 years of age. ASTN1 is expressed at the same level across development, but ASTN2 levels spike around the end of the first trimester and again during early infancy, suggesting that it is involved in early brain growth.