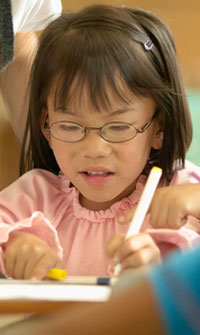 Gender gap: Rett syndrome, primarily caused by a mutation on the X chromosome, is seen almost entirely in girls.

Most cases of Rett syndrome in China are the result of mutations on the paternal copy of MeCP2, according to a study published 27 August in the European Journal of Medical Genetics1.

Rett syndrome is a developmental disorder that presents primarily in girls. Most cases of Rett are caused by mutations in the MeCP2 gene, and a minority by mutations in CDKL5 or FOXG1.

Of the 315 MeCP2 mutations the researchers identified, 249 are variations of single DNA nucleotides, which either truncate the protein or change the code for an amino acid. The majority of these mutations disrupt either the portion of the MeCP2 protein that dampens the expression of other genes, or a signaling tag that targets the protein to the nucleus.

The remaining mutations are either deletions within the gene, insertions of DNA nucleotides or a mutation that influences assembly of the final genetic message, or mRNA.

In 85 of the 90 individuals for whom there is sufficient information to determine the mutation’s origin, the mutation is on the paternal chromosome. One girl inherited a MeCP2 mutation from her mother. Her mother has no symptoms, however, because her copy of the X chromosome with the mutation is not expressed in most cells.