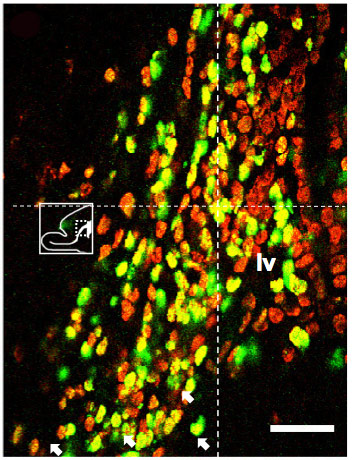 Deleting one copy of T-box 1, or TBX1, a gene on the autism-linked chromosomal region 22q11.2, leads to social and communication deficits in mice, according to a study published 20 September in Human Molecular Genetics1. The results suggest that TBX1 could be responsible for the autism-related deficits seen in individuals with a 22q11.2 deletion.

Several studies in the past few years have identified copy number variations, duplications or deletions of genetic regions, in individuals with autism or schizophrenia. These regions often span several genes, making it challenging to pinpoint the specific genes responsible.

Studies have associated the deletion of one copy of the 22q11.2 region, which includes about 30 genes, with both autism and schizophrenia.

TBX1, a gene in this region, regulates the expression of other genes. A 2006 study found that it is inherited along with psychiatric symptoms in a family that has one member with Asperger syndrome2.

In the new study, researchers further explored the role of TBX1 by deleting one copy of the gene in mice. TBX1 is expressed throughout the brain, particularly in regions where neurons are actively proliferating, they found. They also assayed social behavior by placing two mice together in a new cage and noted how many times the mice approached each other during five-minute sessions.

The mutant mice interact less with other mice than controls do, the study found. However, they are just as interested as controls in exploring a new object and just as capable of detecting the scent of peanut butter. They are also as likely as controls to run around an open cage and to walk on elevated platforms.

These results suggest that the deficits in social interaction are not due to less interest in novel things, an inability to detect other mice by smell, increased anxiety or motor deficits, the researchers suggest.

When separated from their mothers, the mutant mouse pups are less likely than controls to make complex vocalizations that include two syllables, the study found. They are also more likely than controls to continue to explore the same arm of a maze instead of switching to another, a behavior that is reminiscent of the restricted interests seen in individuals with autism.

The mutant mice do not show deficits in motor skills, which are seen in some individuals with a 22q11.2 deletion. These deficits could be associated with a different gene in the same region, the researchers suggest.