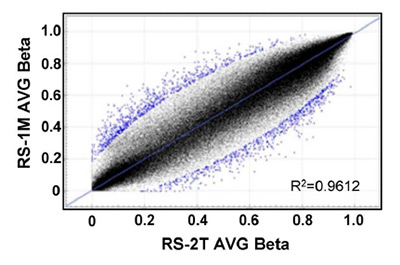 Methyl map: A set of twins with Rett syndrome have different methyl marks at 252 spots in the genome that may change nearby gene regulation.

Methylation — modifications to DNA that regulate gene expression — may explain why identical twins with the same Rett syndrome mutation have different symptoms, according to a study published 21 June in PLoS One1.

When chemical marks called methyl groups are placed on DNA, they tend to block access to a gene’s regulatory region, dampening the gene’s expression. Methylation is one form of epigenetic regulation, which alters gene expression without changing the underlying DNA sequence.

Studies suggest that autism may result from a combination of mutations and environmental factors, with the latter exerting their influence through epigenetics.

In the new study, researchers describe a pair of identicaltwin girls who have Rett syndrome with differing severity. One girl has classic symptoms of the disorder, including a loss of language after 1 year of age, seizures, abnormal hand movements and motor skill deficits so severe that she uses a wheelchair.

The other girl lost language ability after 2 years of age and has unusual hand movements. But she can run, jump, swim and use her hands to perform tasks. She has some seizures, but these are controlled with epilepsy drugs.

However, the girls have different modifications at 252 of 450,000 methylation sites across the genome. The researchers looked closely at 14 of these regions that precede the start of a gene and so are likely to regulate its expression. Three of these genes — MKX, CKB and FYN — are expressed at different levels in the two girls.

MKX controls the expression of other genes. Mice that lack MKX have problems with their muscles. CKB and FYN both regulate neuronal signaling.