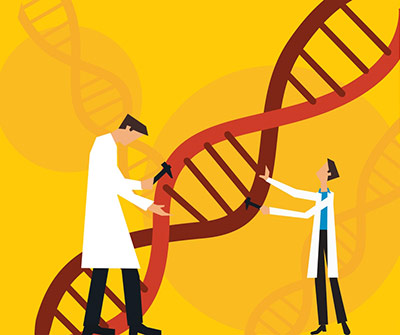 Multiple mutations: Although MeCP2 is often described as the Rett syndrome gene, people with the syndrome may instead have mutations in CDKL5 or FOXG1.

Harmful mutations in MeCP2 don’t always lead to Rett syndrome, and the syndrome can result from mutations in other genes, according to a study published 26 June in the Journal of Molecular Diagnostics1.

This suggests that Rett be redefined as a symptom-based diagnosis, and not as a genetic disorder caused by a single gene, the researchers say.

Rett syndrome is a developmental disorder characterized by a loss, or regression, of motor skills and language around 2 years of age. Most cases of the syndrome result from mutations in MeCP2, which regulates the expression of thousands of other genes.

Atypical forms of Rett syndrome, which do not adhere to the same strict pattern of regression, may be the result of a mutation in either CDKL5 or FOXG1. Some researchers argue that these mutations lead to distinct disorders that only resemble Rett syndrome.

In the new study, researchers looked for mutations in MeCP2 in 120 women referred to the clinic for possible Rett syndrome and 120 women who have intellectual disability without a known genetic cause.

The researchers identified 18 harmful mutations in MeCP2 in 21 of the 120 women with possible Rett syndrome. All of the mutations arose de novo, meaning they were not inherited. Of these 120 women, 28 have the classic disorder, 5 have atypical Rett and the rest were diagnosed as having Rett-like symptoms.

Of the 87 women who have only Rett-like symptoms, 5 have a harmful mutation in MeCP2. The researchers also found three harmful mutations in MeCP2 among the women with intellectual disability.