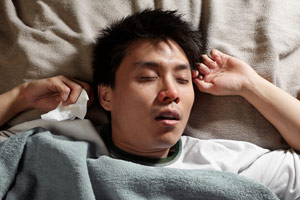 Good night: Taking the hormone melatonin may improve sleep in some Chinese individuals with autism.

Some Chinese individuals with autism have rare mutations that may disrupt the production of melatonin, the hormone that regulates sleep, according to a study published 17 January in PLoS One1.

People with autism often struggle to get regular and restful sleep, but may sleep better if they take melatonin supplements. What’s more, some studies suggest that they have lower levels of melatonin in their blood than controls do.

In the new study, researchers looked at ASMT in 398 individuals with autism and 437 controls, all of Chinese descent. They found that six people with autism have one of four rare mutations that are likely to disrupt the ASMT protein. None of the controls have these mutations.

Studies should confirm these findings and find more rare variants by including more participants, the researchers say.

Although the link to autism is inconclusive, studies have also reported a link between ASMT and other neurological disorders, including bipolar disorder and schizophrenia4, 5.