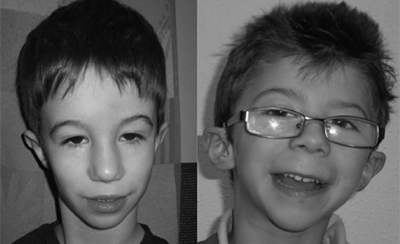 Facial features: Children who have a duplication of 2q23.1 have distinct features, including long eyelashes and a prominent nose.

Duplication of a chromosomal region that includes the autism-linked MBD5 gene leads to intellectual disability, language impairment and autism-like symptoms, according to a study published 1 May in the European Journal of Human Genetics1.

A study published last year described similar symptoms, including motor delay and unusual facial features, in 65 people who have a deletion in the same region, known as 2q23.1. This suggests that precise levels of MBD5, which regulates gene expression by altering the structure of DNA, are crucial for brain development.

Three of the individuals in the new study inherited their 2q23.1 duplication from their unaffected mothers; in the remaining individuals, the mutations arose spontaneously.