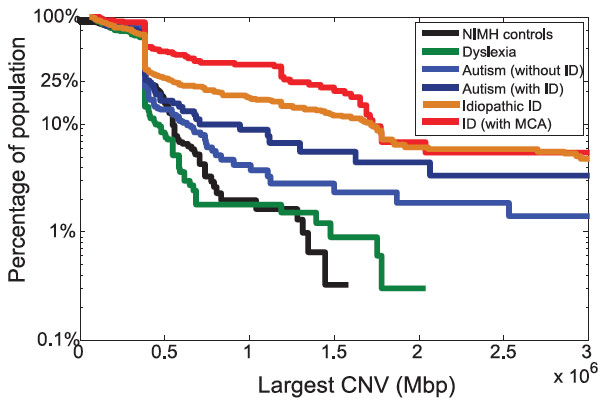 Intellectual disability is more likely to be associated with multiple, large or non-inherited duplications and deletions of DNA than is autism, according to a study published 7 November in PLoS Genetics1.

In the past few years, several studies have associated these so-called copy number variants (CNVs) with neurodevelopmental disorders, including autism, schizophrenia and attention deficit hyperactivity disorder.

In the new study, the researchers compared CNVs in 501 people with intellectual disability, 376 with dyslexia, 350 with autism and 337 controls. Individuals with intellectual disability are about 14 times more likely, and those with autism are 3 times more likely, than controls to have CNVs longer than one megabase, the study found. By contrast, people with dyslexia show little enrichment of large CNVs compared with controls.

In particular, rare CNVs, which do not overlap significantly with those found in 8,329 controls, are more common in individuals with intellectual disability or autism, compared with controls or with those who have dyslexia. And 44 of 90 rare CNVs identified in the study arise spontaneously, or de novo, in the affected individual. These non-inherited variants are also more common in individuals with intellectual disability than in those with autism.

The results suggest that large CNVs are associated with the more severe neurodevelopmental disorders, the researchers say.