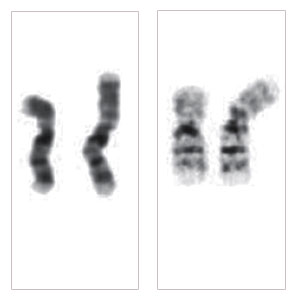 Mixed message: Two types of alterations to chromosomes, one harmful (left) and the other not (right), are indistinguishable under the microscope.

Traditional prenatal testing cannot distinguish between large disruptive chromosomal duplications and multiple harmless repeats, according to a study published 25 July in the European Journal of Human Genetics1. A newer technique called chromosomal microarray analysis can detect the difference between the two, but is infrequently used for prenatal analysis.

The researchers identified four individuals who have large expansions within chromosome 16 that look similar under the microscope. Two of them have a duplication of the 16p11.2-12.2 region and severe developmental delay, whereas the other two have multiple repeats of a smaller region and no signs of developmental delay.

The similarity between these chromosomal abnormalities during prenatal testing can have grave consequences. For example, a 2006 study describes a woman who aborted a fetus with similar repeats, believing it to be a harmful 16p duplication2.

The 16p11.2-12.2 region starts at the end of 16p11.2, encompasses all of 16p12.1 and ends at the start of 16p12.2. Large duplications of this eight-megabase region are visible under a microscope and lead to developmental delay. For example, twin boys with a duplication of this region have autism, intellectual disability and unusual facial features, or dysmorphology.

These duplications are distinct from the well-known duplications or deletions of a 600-kilobase region within 16p11.2. These copy number variants are not visible under the microscope, but can be identified using chromosomal microarray analysis, a technique that detects DNA fragments.

The new study identified two individuals with a duplication of 16p11.2-12.2. Both have intellectual disability, obsessive behaviors and dysmorphology, and one is diagnosed with autism.

The other two have chromosomes that also look abnormal under the microscope, but no symptoms. More detailed analysis found that both individuals have several extra copies of a relatively small region in the middle of 16p11.2 that does not overlap with the autism-linked region. One individual has six extra copies of a 692-kilobase section, and the other has at least eight extra repeats of a 945-kilobase section.