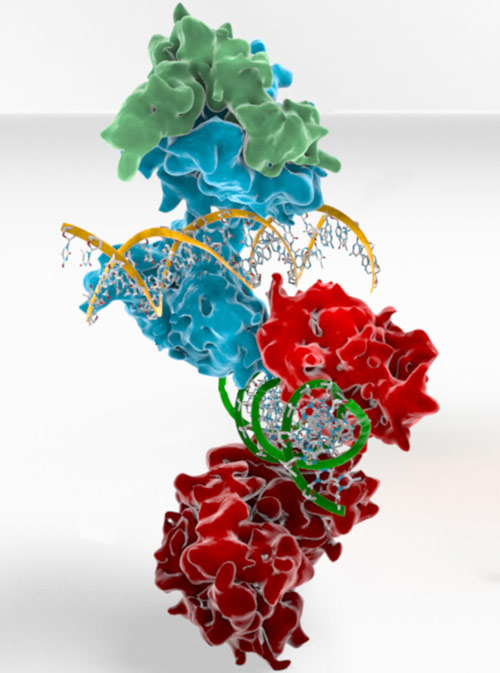 3Dciencia.com Master regulator: A protein that regulates hundreds of genes affects the expression of at least three autism candidate genes.

FOXP2, a protein linked to language development that regulates the expression of some autism-associated genes, also dampens expression of DISC1, mutations in which have been linked to both schizophrenia and autism. The results were published 20 March in Human Molecular Genetics1.

Researchers originally identified DISC1 mutations in a large Swedish family with a history of schizophrenia and bipolar disorder, and subsequent studies have linked mutations in the gene with autism. Studies also report lower levels of DISC1 in the postmortem brains from individuals with schizophrenia compared with those from controls2.

Mutations that affect DISC1 gene expression could lead to lower protein levels. Previous studies suggest that FOXP2, which regulates the expression of hundreds of genes, binds within the DISC1 promoter region — a stretch of DNA preceding the coding sequence that regulates gene expression3.

Researchers have found mutations in FOXP2 in families with severe language impairments; however, the gene has also been implicated, although indirectly, in autism. It regulates two autism-associated genes, CNTNAP2 and MET, both of which play a role in regulating the connections between neurons.

In the new study, the researchers expressed three gene constructs, a combination of a gene coding for a bright blue protein attached to one of three stretches of DNA that precede the DISC1 gene, in human cells. These DISC1 sequences were expected to include the gene’s promoter region. Each stretch of DNA was sufficient to turn on the blue protein, staining the cells in which the construct was expressed, the study found.

The DNA sequence that includes 300 base pairs preceding the DISC1 gene has the strongest effect on gene expression, which is dampened when the region is expanded to include another 700 base pairs. This suggests that regulatory elements that enhance DISC1 gene expression are included in the smaller, 300-base-pair stretch of DNA, and that these are modified by repressors located in the larger region.

The results link mutants expressed primarily in individuals with a language disorder to neuropsychiatric disorders and autism, the researchers say.