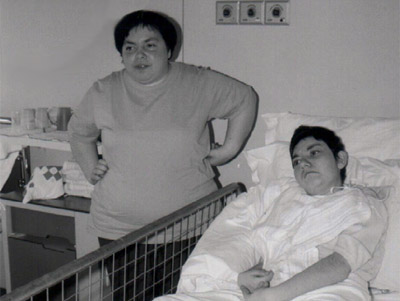 Altered outcome: A woman (left) with a MeCP2 mutation can speak in short phrases, whereas her younger sister (right), who has the same mutation, has never been able to speak or walk.

A single gene mutation leads to Rett syndrome, but other genetic variants may modify the severity of an individual’s symptoms, according to a study published 28 February in PLoS One1.

Rett syndrome is a developmental disorder characterized by intellectual disability, problems with language, motor deficits and features of autism. The primary cause is a mutation in MeCP2, which regulates the expression of other genes.

However, the severity of the syndrome’s symptoms varies among individuals: Most people with a MeCP2 mutation are incapable of speaking or walking, but a few can do both.

To look for genetic variants that might influence the effects of a MeCP2 mutation, researchers sequenced the exome, or protein-coding region of the genome, of two pairs of sisters with Rett syndrome. Each pair of sisters has the same MeCP2 mutation, but one in each pair has classic Rett syndrome, and the other has the milder form.

The two women with classic Rett syndrome, one of whom was 24 years old at the time of the study and the other 34, have 112 single nucleotide changes, or variants, in 108 genes. None of these variants are found in the women with the milder version. The women with severe Rett syndrome share potentially harmful variants in three genes, including RYR1, which affects calcium levels in cells and is involved in muscle function, and CNTNAP2, which has been linked to language deficits and autism.

The women with the mild version of Rett syndrome (one of whom was 33 years old and the other 39) have variants in 80 genes, none of which are shared by both.

Interestingly, all four women have variants in genes that may protect cells from oxidative stress — DNA damage caused by oxygen molecules. The women with severe Rett syndrome, but not those with the milder version, have elevated levels of five markers of oxidative stress, the study found.

These results suggest that susceptibility to oxidative stress may modulate the symptoms associated with a MeCP2 mutation, the researchers say.