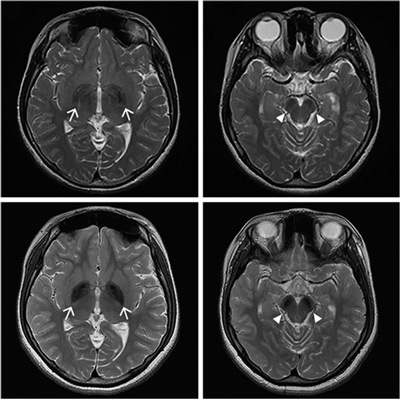 Mineral abundance: Brain scans of a girl with Rett syndrome at ages 11 (top row) and 14 (bottom row) indicate the progressive buildup of iron.

A teenage girl with Rett syndrome has a mutation in WDR45, a gene that is mutated in people who abruptly lose motor and mental skills in adulthood,according to a study published 13 March in the Journal of Human Genetics1.

Researchers first described the adult regression syndrome, called beta-propeller protein-associated neurodegeneration (BPAN), in 2012. They identified the disorder in a group of 19 adults and one 17-year-old who had mutations in WDR452. BPAN causes developmental delay during childhood, followed by sudden onset of movement problems and dementia in the teenage years or early adulthood.

By contrast, people with Rett syndrome lose language ability and motor skills in early childhood.Mutations in the MeCP2 gene cause most cases of Rett syndrome. In rarer cases, mutations in other genes, such as FOXG1 and CDKL5, also cause the syndrome.

Researchers have previously noted Rett-like characteristics, such as repetitive hand motions, in people with BPAN3. Because of this, they have suggested that clinicians should test people with genetically unexplained Rett syndrome for mutations in WDR45. The new paper’s authors add that children with unexplained Rett symptoms may in fact be experiencing BPAN’s early stages.

In the new study, the researchers sequenced the exome, or the protein-coding portion of the genome, of a 14-year-old girl in Japan diagnosed with Rett syndrome. The girl has a mutation in the copy of MeCP2 inherited from her mother. However, her mother shows no developmental delay and some healthy controls have the same mutation, suggesting that this mutation did not cause the girl’s symptoms.

The girl also has a WDR45 mutation that arose spontaneously and is not present in either 574 controlsequences in the study or 6,500 controls from a National Heart, Lung and Blood Institute database.

WDR45 helps cells digest unwanted proteins and other waste.In adults with BPAN, this function is disrupted. It’s unclear exactly how WDR45 dysfunction leads to BPAN, but adults with the disorder have iron deposits in parts of the brain that regulate movement and other mental functions.

The girl may eventually also be diagnosed with BPAN, depending on whether she shows characteristic symptoms as she ages, they say.