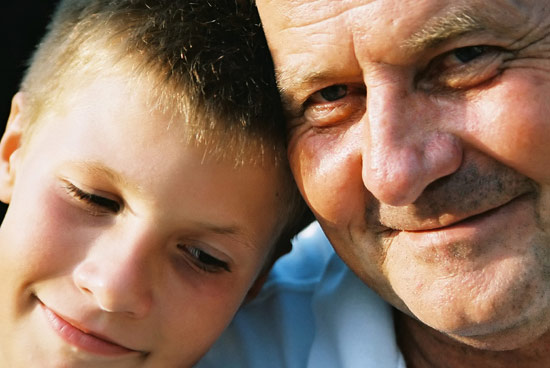 Mature mutation: Children who have fathers older than 31 have low levels of many of the same genes as do children with autism.

Children with autism and those who have fathers older than 31 both have lower-than-normal levels of proteins that regulate other genes, according to a study published in February in PLoS One.

These differences lead to overall changes in gene expression, with fewer genes showing spikes or dips from average levels of expression.

Although gene expression in neurons is a better measure of brain function, blood samples can indicate system-wide differences in people with autism.

People with autism have much lower variation in gene expression than controls do, according to the study.

Interestingly, children who have fathers older than 31 years show a similar pattern, suggesting that paternal age mimics the gene expression effects of autism.

Epidemiological studies have suggested that men older than 30 — and especially those older than 50 — have a higher risk of fathering children with autism.

When the researchers looked at the levels of specific protein-coding messages, they found 593 genes that are expressed at lower-than-normal levels in both groups of children. Many of these genes code for transcription factors — which regulate expression of other genes — and could account for overall changes in the pattern of gene regulation.

When the researchers treated cultured cells with drugs that inactivate certain transcription factors, they saw changes in the peaks and dips of overall gene expression, similar to those seen in both groups of children.

Modifying patterns of gene expression could help alleviate the symptoms of autism, the researchers suggest.