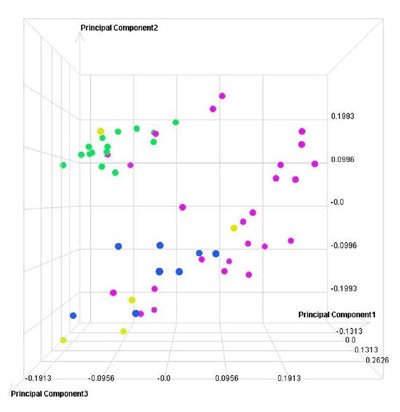 Gene profile: The gene expression pattern in autism gut cells (pink) is distinct from that in controls (green) and gut disorders (blue, yellow).

Gut cells from children with autism who have gastrointestinal (GI) problems have gene expression patterns that suggest a unique immune disorder, according to a study published 8 March in PLoS One1.

Autism is frequently accompanied by GI problems such as stomach pain, constipation or diarrhea. But there is conflicting evidence over whether these are merely side effects of other features of the disorder, such as picky eating.

Certain chronic GI conditions are caused by a hyperactive immune system, which has also been linked to autism, suggesting a possible connection between the GI symptoms in autism and immune dysfunction.

The new study looked at the relationship between gut symptoms in autism and two inflammatory GI disorders: Crohn’s disease and ulcerative colitis. Studies have shown that cells taken from the intestines of people with either of these disorders have distinct gene expression patterns2.

The researchers collected cells from the large and small intestines of 25 people with autism who have GI symptoms, 8 people with Crohn’s disease, 5 people with ulcerative colitis and 15 controls.

Overall gene expression patterns in the autism cells are distinct from those in controls, the researchers found. They are more similar to cells from people with one of the two inflammatory disorders, but are not a perfect match with either.

For example, small intestine cells from people with autism share 1,381 altered genes with Crohn’s disease and 1,071 with ulcerative colitis; 587 genes overlap with both disorders.