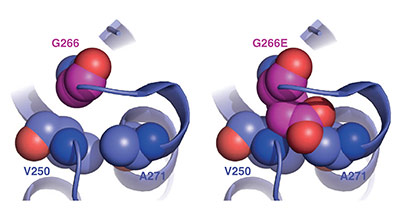 Point mutant: A mutation that leads to fragile X syndrome replaces a small, neutral amino acid (left) with one that is bulky and negatively charged (right).

A teenager with fragile X syndrome carries a rare mutation that changes a single amino acid in the FMRP protein, researchers reported 22 January in the European Journal of Human Genetics1.

This is only the second known instance of this kind of mutation, called missense, identified in someone with the syndrome. Mutations associated with the syndrome typically shut down the protein’s production.

Fragile X syndrome is a rare disorder characterized by severe intellectual disability, social anxiety and, often, symptoms of autism. It is generally caused by having more than 200 repeats of a sequence within the FMR1 gene. The expanded repeats shut down expression of the FMRP protein. Genetic testing for fragile X syndrome typically involves testing for these repeats rather than sequencing the entire gene.

In the new study, researchers described a teenage boy who was diagnosed with developmental delay at 6 months of age. At 13 years of age, he had the cognitive, language and motor skills of a 4-year-old. However, he does not have the classic FMR1 expanded repeats, and so clinicians diagnosed him with an autism spectrum disorder and attention deficit hyperactivity disorder.

On sequencing the full FMR1 gene, researchers found a mutation that switches a small, neutral amino acid to one that has a bulky, negatively charged side chain.Mapping the predicted shape of this protein suggests that the change would significantly impede the protein’s ability to fold into the correct shape.

Introducing the mutant gene into neurons from mice lacking FMR1 does not fix deficits in the neurons’ signaling, the study found.

The results suggest that a single mutation in FMR1 can lead to fragile X syndrome. The researchers recommend that clinicians sequence the gene when diagnosing the syndrome.