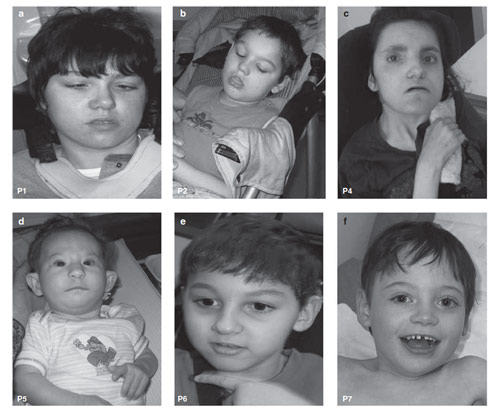 Unique features: Individuals with a Rett syndrome-like disorder each have distinct facial abnormalities.

Seven individuals who have the symptoms of Rett syndrome carry a genetic disruption near, or overlapping with, the FOXG1 gene, according to a report published 27 June in the European Journal of Human Genetics1.

Rett syndrome is typically caused by mutations in MeCP2, and the symptoms — intellectual disability and language and motor deficits — appear between 6 to 18 months of age. Because MeCP2 is located on the X chromosome, Rett syndrome is generally fatal in boys and primarily seen in girls.

However, a congenital form of the syndrome, seen in both boys and girls, has been linked to mutations and deletions in FOXG1. Like MeCP2, FOXG1 is thought to control the expression of other genes in the brain.

The new study suggests that individuals with symptoms of Rett syndrome should be screened for genetic mutations in the 14q12 chromosomal region, which includes the FOXG1 gene.

In a study published last year, researchers characterized 26 individuals with deletions in one copy of FOXG1 and proposed ‘FOXG1 deletion syndrome’ as distinct from Rett syndrome.

FOXG1 deletion syndrome is characterized by small head size, severe intellectual disability, complete lack of language, motor deficits that include involuntary movements and an abnormal corpus callosum, which connects the two hemispheres of the brain2.

In the new study, researchers looked for single-base mutations in FOXG1 in 80 individuals with Rett-like symptoms who do not have a mutation in MePC2. They also screened for copy number variations (CNVs) — duplications or deletions of DNA — in another 18 individuals with Rett syndrome with intact MeCP2 genes.

Of the 80, 2 carry a mutation in FOXG1 that disrupts a portion of the protein sequence. And 2 of the 18 screened for CNVs have deletions in the 14q12 region that include FOXG1.

The researchers also identified three people who have deletions in a 14q12 region neighboring FOXG1 that includes PRKD1, a gene that regulates cells growth. Each of these three people expresses more FOXG1 protein in non-neuronal cells than controls do.

Overall, the study suggests that individuals with alterations to FOXG1 expression have more variable symptoms than previous studies have suggested.

The study brings the total number of characterized individuals with Rett-like symptoms who have mutations in FOXG1 to 26 and those with CNVs to 25.