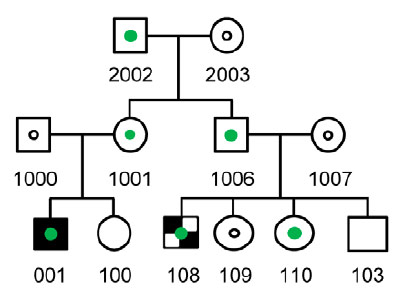 Researchers have identified 12 copy number variants (CNVs) — duplications or deletions of DNA regions — that are transmitted along with autism in families with a history of the disorder. The results were published 7 October in PLoS One1.

Several CNVs have been linked to autism. Many of these arise spontaneously, or de novo, but others are likely to be inherited and may lead to autism in combination with other genetic and environmental factors.

In the new study, researchers looked at detailed pedigrees, following at least three generations, of 42 families that have at least two individuals with autism. They identified 26,263 CNVs in 382 individuals from these families. Of these, 12 CNVs are present in every individual with autism in any given family, and are either absent or rare in 899 controls.

Two of the CNVs, duplications of 7p21.3 and 15q24.1, have previously been linked to autism2. Four other CNVs overlap with genes linked to autism, including UBL7, which is expressed in the brain and may be associated with the ubiquitin pathway.

Three other CNVs — duplications of 10p12.31 and 10q23.32 and deletion of 13q31.1 — are absent in controls and from the database of common variants, boosting the case for their being potential autism candidates, the researchers say.

Of the 285 family members without a diagnosis of autism, 38 carry one or more of the CNVs found in individuals with the disorder. Of the 38, 19 have a history of neurological symptoms, such as depression, anxiety or autism-related symptoms.

The results suggest that inherited CNVs that are relatively unique to individuals with autism in these families play an important role in the disorder, the researchers say.