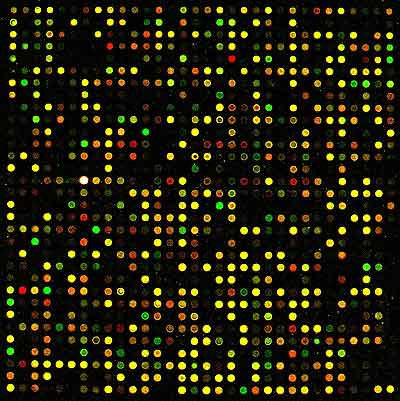 Divining dots: Chromosomal microarrays quantify the amount of a genetic region that binds to a probe, and so can detect deletions or duplications of a specific sequence.

Divining dots: Chromosomal microarrays quantify the amount of a genetic region that binds to a probe, and so can detect deletions or duplications of a specific sequence.

Researchers have identified mutations that may be associated with autism using a technique that can detect copy number variants (CNVs) — deletions or duplications of DNA — that are as small as a single gene. The results were published 24 August in Human Molecular Genetics1.

Several studies have identified a higher rate of spontaneous, or de novo, CNVs in individuals with autism compared with controls. Chromosomal microarray analysis uses probes made of DNA fragments to detect gaps or duplications in the DNA sequence. Because these probes are large and overlapping in order to cover the whole genome, they only detect CNVs that span relatively large regions.

In the new study, the researchers narrowed down this window by concentrating on the protein-coding region of the genome, called the exome, and used up to six overlapping probes for each of 197,332 unique exons. They looked at 99 individuals with autism and their parents from the Simons Simplex Collection, a database of clinical and genomic data from families that have only one child with autism and unaffected parents and siblings.

The researchers found 74 CNVs in these individuals, 55 of which are likely to lead to disease because they are either de novo, meaning they are not present in either parent,or were inherited from both parents. Of these, 35 are ones that standard microarray analysis did not detect.

Of the 55 potentially disease-causing CNVs, 11 are rare based on the Database of Genomic Variants, a curated list of variants present in the general population. The researchers define ‘rare’ as meaning that less than half of the CNV region overlaps with the top 99 percent of the most frequently occurring variants in the database.

The researchers identified one CNV that disrupts TMLHE, or trimethyllysine hydroxylase, epsilon, an enzyme involved in the synthesis of carnitine, a compound that metabolizes fatty acids. Absence of carnitine can lead to oxidative stress, which has been linked to autism.