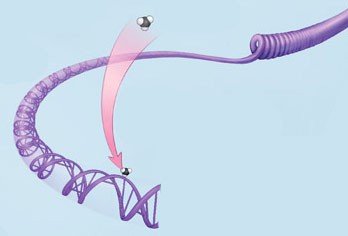 Modified modifier: DNA tagged with a methyl group, which regulates gene expression, can be further modified with a hydroxyl tag.

A newly discovered DNA modification may play a role in development and regulate the expression of genes linked to fragile X syndrome and autism, according to a study published 5 October in Human Molecular Genetics1.

Although the sequence of DNA is fixed, chemical modifications — such as the addition of a methyl group to a DNA base — can turn genes on or off. This level of regulation, called epigenetics, links environmental experience to heritable changes in our genetic profile.

Studies in the past few years have found that DNA methylation tends to concentrate around autism-linked genes and that it changes in response to neuronal activity — contrary to the previous belief that methyl marks are fixed after development.

In a 2009 study, researchers identified a new DNA modification, called hydroxymethylation, that adds a hydroxyl group to methylated DNA2. This modification is present primarily in brain tissue, near the start sites of genes. The pattern of hydroxymethylation changes as mice age, suggesting that it plays a role in development.

Studies that looked at methylation may in fact be detecting hydroxymethylation because many methods cannot distinguish the two.

In the new study, researchers compared the level of hydroxymethylation in the cerebellum — a brain region involved in motor control — in one fetal and two adult postmortem brains.

Hydroxymethyl marks cluster at genomic regions known to regulate gene expression, and increase by about 42 percent from the fetal to the adult brain, as the brain is undergoing development, the study found.

A number of regions of hydroxymethylation are unique to either fetal or adult brains, suggesting that the marks regulate changes between an immature and a mature brain. These regions are also highly likely to be associated with genes.

The marks unique to fetal brains are similar to those seen in embryonic stem cells, supporting the theory that they are typical of immature cells.

Hydroxymethyl marks are more likely to be associated with a group of genes whose expression is regulated by FMRP — the protein absent in fragile X syndrome — than the rest of the genome. They are also enriched at the autism candidate genes SHANK3, TSC2, CACN1C and OXTR.

Hydroxymethyl marks are not grouped preferentially near the start sites of 190 autism candidate genes when considered as a whole. However, the marks at these genes tend to change during development from fetal to adult brains, the study found.