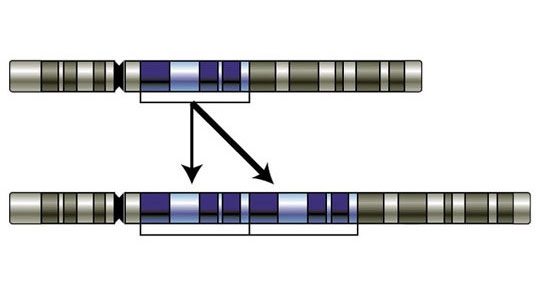 Structural signals: Having two copies of a genetic region can affect the expression of other genes on the same chromosome.

Copy number variations, or CNVs — duplications or deletions of DNA segments — can influence the expression of unrelated genes on the same chromosome, according to a study published in November in PLOS Biology.

Several CNVs, including a deletion of the 16p11.2 region — found in one percent of people with autism — have been linked to the disorder. Researchers generally look within the affected region to identify relevant genes. But the new study suggests that the effects of CNVs may be more far-reaching.

Researchers looked at chromosomal region 17p11.2 which, when duplicated, leads to Potocki-Lupski syndrome, a disorder that causes speech and learning defects and some features of autism. Deletion of one copy of the 17p11.2 region leads to Smith-Magenis syndrome, a neurological disorder characterized by intellectual disability and behavioral problems.

The researchers looked at mice with either one copy (a deletion) or three copies (a duplication) of this region and, as expected, saw opposite effects on several behavioral and neurological features. For example, mice with one copy of the region are overweight, whereas mice with three copies are underweight.

The researchers also engineered mice with two copies of the region on one side of the chromosome and none on the other. These mice have the appropriate number of gene copies, but have altered gene structure.

Surprisingly, these mice also have several phenotypes, including less anxiety, a phenotype also seen in those with the deletion. The mice also show less preference for a new mouse over one they’re used to and more activity when running around an open area, behavior observed in mice with the duplication.

The researchers found that the mice have altered brain expression of several genes on the same chromosome that are not directly linked to the duplicated region. The results suggest that researchers should cast a wider net when considering which genes might contribute to autism in people with CNVs.