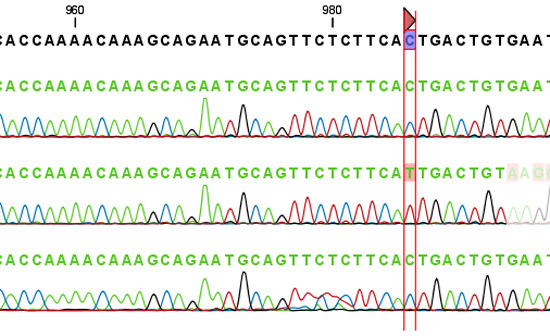 CLCbio Rate of change: Mutations present in the child but not in parents are more common in people with autism.

Spontaneous harmful mutations are more frequent in individuals with autism and schizophrenia, according to two studies published in September.

Each paper looked at different types of mutations: Evan Eichler and his colleagues at the University of Washington looked at deletions and duplications of stretches of DNA, also called copy number variations (CNVs).

Guy Rouleau and colleagues at the University of Montreal investigated single DNA base changes and small deletions in genes that play a role at synapses, the junctions between neurons.

Each team determined a neutral rate of de novo mutation — present in the child but in neither of the parents — and showed a higher mutation rate in autism-associated genes.

Eichler’s team compared the mutation rate of 1,757 parents-and-child sets, called trios, in an autism database with that of 492 trios from an asthma study. The researchers saw a slight but significant increase in the number of large CNVs in the autism group: 9.9 percent of medium (>500 kilobases) and 3.7 percent of large (>1 megabase) CNVs, compared with 9 percent and 3 percent respectively in the asthma group.

The researchers found almost twice as many CNVs in genes compared with non-coding regions in the autism group. They also saw a four-fold higher rate of CNVs in those with autism compared with unaffected siblings.

Rouleau’s team looked at 401 synaptic genes — many of which have been linked to autism — in 285 individuals with autism or schizophrenia and identified 14 unique de novo mutations. The researchers also saw a higher mutation rate and proportion of harmful mutations in the synaptic genes compared with non-coding regions. By contrast, they found only one de novo mutation in a control group.

Both groups also report that mutations can arise spontaneously in DNA from cells grown in culture, striking a note of caution when using cell lines for similar genetic studies.