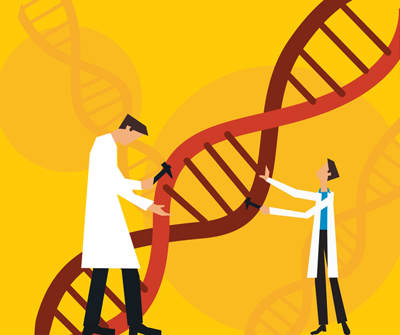 Double trouble: Children with autism have about eight times more duplicated regions on their chromosomes than their unaffected parents do.

Children with autism have more copies of some chromosomal regions than controls do, according to a study published 19 April in Human Molecular Genetics1. This is true even after excluding the regions that are the most likely to lead to autism.

Copy number variations (CNVs) — duplications or deletions of regions of a chromosome — are strongly linked to autism. Certain CNVs, such as a deletion of 16p11.2,almost always lead to autism-linked symptoms or a diagnosis of autism. These CNVs are rare among the general population, but more frequent in people with autism. The role that CNVs commonly seen in the general population play in autism is less clear.

In the new study, researchers looked at duplications and deletions in the genomes of 274 children with autism and 242 controls, who are part of the Childhood Autism Risks from Genetics and Environment (CHARGE) study. They confirmed their findings using 337 controls and 350 individuals from the Simons Simplex Collection (SSC), a database of genetic and clinical information from families that have one child with autism and unaffected parents and siblings. The SSC is funded by the Simons Foundation, SFARI.org’s parent organization.

In both groups, people with autism have more duplications, but not deletions, of DNA than controls do. This is the case even after excluding duplications present in less than 0.1 percent of the general population, and those known to be linked to neurological symptoms. This suggests that duplications that are common throughout the population contribute to autism risk, perhaps in combination with other factors, the researchers say.

Among another 1,124 families in the SSC, children with the disorder have about eight times more duplicated regions than either their mothers or their fathers.

Children in the CHARGE study who have more duplications also have more social and communication deficits (based on the Vineland Adaptive Behavior Scales) than do those who have fewer duplications.

The researchers also highlighted three completely novel CNVs — deletion of 4q32.3, duplication of 4q13.1 and duplication of 10q11.23 — that are present in an individual with autism from CHARGE, but in none of 8,329 controls. These regions may contribute to autism, they say.