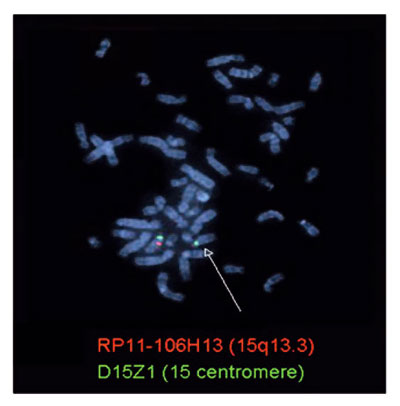 Chromosome capture: Deletion of one copy of a region (red) of chromosome 15 (centromeres in green) leads to a number of psychiatric symptoms.

Symptoms associated with a deletion of the 15q13.3 chromosomal region could result from the loss of a single gene, CHRNA7, according to a study published 9 July in Clinical Genetics1.

Researchers first found rearrangements of the 15q13.3 chromosomal region in 2006 in four people with intellectual disability2. Studies have since found that a deletion of one copy of this region — inherited in 75 percent of cases — can cause a syndrome characterized by seizures, schizophrenia and autism. The deletion is also found in unaffected individuals, however.

Two studies published in the past few years have found a total of four individuals with a deletion in CHRNA7, one of six genes in the 15q13.3 region3,4. These people have symptoms that closely resemble those of the 15q13.3 deletion syndrome.

CHRNA7 codes for a subunit of an ion channel that lets through positively charged ions and regulates signaling at the junctions between neurons.

In the new study, researchers looked at CHRNA7 in a database of 15,000 DNA samples tested at the Mayo Clinic Cytogenetics Laboratory, which tests for chromosomal disorders. They found 19 individuals, 10 of whom belong to one of two extended families, with a deletion of one copy of the gene. They also identified one individual who is missing both copies of the gene. All but one of these deletions is inherited.

All but two of the individuals, who could not be characterized because they were infants, have at least one of the characteristic symptoms of 15q13.3 deletion syndrome. Among those for whom clinical information is available, three of seven have developmental delay and four of seven have intellectual disability. Four of eight have autism or pervasive developmental disorder–not otherwise specified. A 4-year-old child missing both copies of the gene has severe symptoms, including developmental delay, intellectual disability, small head size and stunted growth.