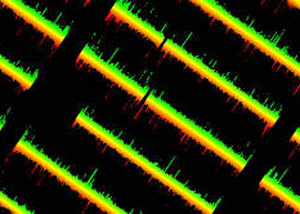 Risk regions: Tourette syndrome is associated with duplications or deletions of chunks of DNA spanning genes that regulate brain signaling.

Genes implicated in Tourette syndrome overlap with those involved in autism, according to an analysis of rare DNA duplications and deletions in people with the syndrome, published in the March issue of Biological Psychiatry1.

Several studies in the past few years have shown that rare duplications and deletions of large pieces of chromosomes, called copy number variants (CNVs), are more common in individuals with autism and schizophrenia than in controls.

In the new study, researchers investigated the role of rare CNVs in individuals with Tourette syndrome, a neurological disorder characterized by involuntary physical and verbal tics. They looked at 460 individuals with the syndrome and 1,131 controls.

Unlike in autism and schizophrenia, people with Tourette syndrome do not have more rare CNVs than controls do, the study found. However, they are more likely to have three large CNVs greater than one megabase in length. The largest of these is a duplication of almost 52 megabases that spans 447 genes.

The researchers also looked at the function of 2,646 genes that are disrupted by rare CNVs in individuals with Tourette syndrome. Their analysis suggests that the histamine signaling pathway plays an important role in the disorder. This pathway regulates the immune system as well as important chemical messengers in the brain and gut.

It also implicates the gamma-aminobutyric acid (GABA) pathway, which dampens signals in the brain and has been linked to autism. One large CNV that overlaps with several GABA-related genes is responsible for much of this association.

The study found significant overlap between the CNVs and genes that have been associated with autism. The researchers looked at 36 genes and 10 genomic regions strongly implicated in autism, called ‘ASD implicated,’ and another 103 genes for which studies show some association with autism, called ‘autism candidates’2.

About 2 percent of individuals with Tourette syndrome have CNVs that disrupt ‘ASD-implicated’ genes compared with only 0.4 percent of controls, the study found. And almost twice as many individuals with the syndrome have CNVs that disrupt either ‘ASD-implicated’ or ‘autism-candidate’ genes than do controls: 10.2 compared with 5.7 percent.

The genes implicated in both Tourette syndrome and autism include CNTNAP2, DISC1, AUTS2, and the 16p11.2 and 22q11.21 genomic regions.

The study did not find significant overlap between Tourette syndrome CNVs and genes implicated in intellectual disability and schizophrenia.