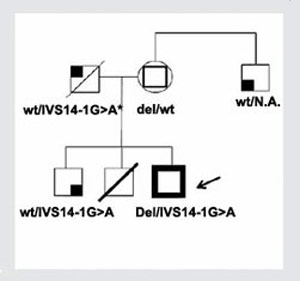 Two mutations in an autism-associated gene, neurexin-1 (NRXN1), may have combined to cause autism in one man, whereas family members with only one of the two mutations have other neurological disorders, according to a study published 15 February in the American Journal of Medical Genetics Part B1.

The NRXN1 protein organizes the connections between neurons, and several studies have linked duplications and deletions of regions of the gene with both autism and schizophrenia.

In the new study, researchers describe a family in which two mutations in NRXN1 may have combined to cause autism, intellectual disability and epilepsy in a 33-year-old man: a 451-kilobase deletion inherited from his mother that removes a regulatory region and the start of the NRXN1 gene; and a point mutation, a single DNA base-pair substitution, that leads to a truncated version of the protein.

The individual’s brother also carries the point mutation. This suggests that it is inherited from their father, because the mutation would be unlikely to arise spontaneously in both brothers. The father, who is deceased, had a diagnosis of paranoid schizophrenia for which he was hospitalized five times. The brother is diagnosed with psychotic disorder, symptoms of which include anxiety, poor communication and social deficits.

The mother carries the deletion and has diabetes. At the time of the study she had no formal psychiatric diagnosis, however a psychological assessment revealed social deficits and impairments in non-verbal communication.

It is possible that mutations outside of NRXN1 contribute to neurological symptoms in the family, as the mother’s brother does not have the deletion, but has a diagnosis of bipolar disorder, the researchers say.

However, the results show how multiple mutations in an autism-associated gene can influence its penetrance — whether the variant leads to symptoms in affected individuals. It also lends support to the multi-hit hypothesis of autism, which suggests that multiple mutations and genetic variants can combine to cause autism.