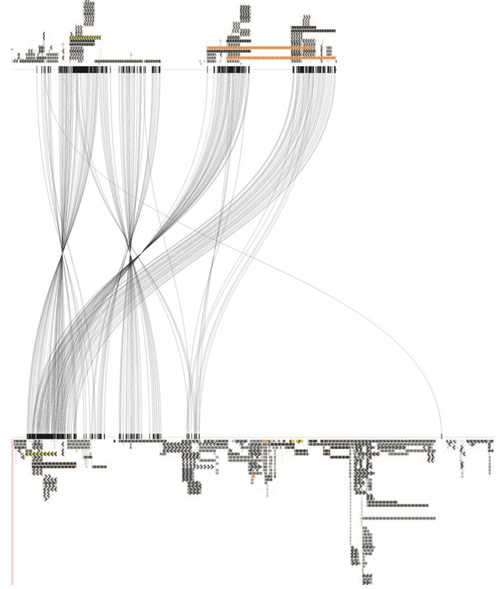 Click to enlarge image Copy cat: Repeated stretches of DNA on either side of the 2q21.1 genomic region (top and bottom, here) have made it difficult to spot the region in genetic screens.

Researchers have found deletions and duplications of a small piece of chromosome 2 in people with autism, developmental delay, epilepsy or attention deficit hyperactivity disorder (ADHD). The findings appeared 21 May in Human Molecular Genetics1.

A 2008 study linked the same genomic segment, dubbed 2q21.1, to families with a history of ADHD2, but the region did not show up in several larger genetic studies of the disorder. The region is small — about 450 kilobases — and flanked by repetitive stretches of DNA, which makes it difficult to spot in genomic linkage screens.

In the new report, researchers performed chromosomal microarray analysis on 17,035 individuals to pick up small DNA deletions and duplications. They found 2q21.1 deletions in five unrelated children with developmental delay, intellectual disability, ADHD or epilepsy, as well as in one person with aggressive behavior. They did not find the deletion in 13,999 healthy controls screened in other studies.

The team also discovered duplications of the same region in another five unrelated children with autism, developmental delay, seizures or ADHD. Combing through several older studies, the researchers found 1 healthy individual out of 8,912 who carries the duplication.

2q21.1 includes five genes: GPR148, FAM123C, ARHGEF4, FAM168B and PLEKHB2. ARHGEF4 is expressed only in the brain and is known to affect the formation and connectivity of neurons. GPR148 encodes a G-protein-coupled receptor, a protein that helps cells respond to chemical changes outside neurons. Other G-protein-coupled receptors have been linked to fever-triggered seizures, schizophrenia and autism.