Genetic variants in protein target sites may contribute to autism 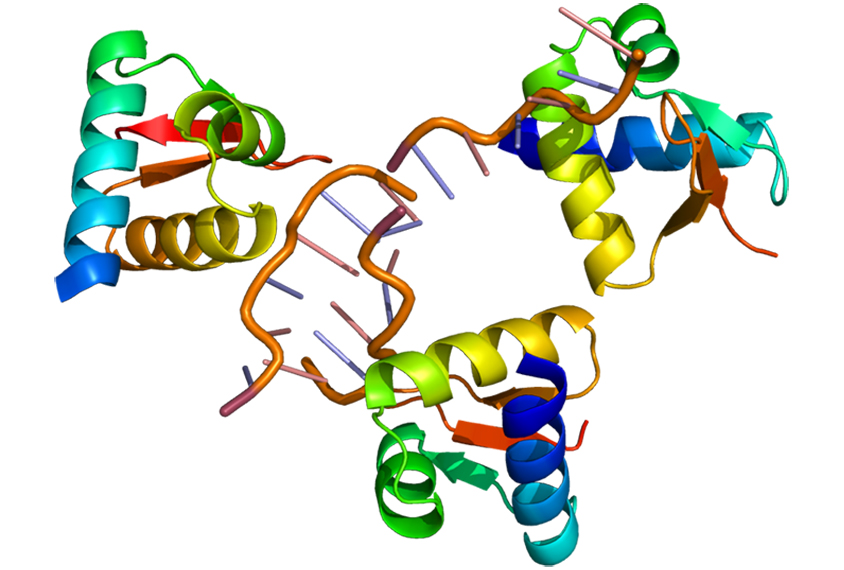 Broken binder: Mutations in RNA-binding proteins or the sequences they attach to can impair their function.

Mutations that disrupt binding sites in RNA molecules may contribute to autism and a variety of psychiatric conditions, according to a new study.

RNA-binding proteins (RBPs) attach to RNA, the intermediary between genes and proteins, and play a variety of roles: Some shuttle RNA to specific locations in the cell, others change its structure, and still others control when it is translated into protein. They are particularly important in the brain, where they can help regulate protein production at synapses.

Some genes linked to autism, including FMR1 and RBFOX1, encode RBPs. Mutations in these genes often impair RBP function in predictable ways, but that function also depends on the RNA sequence the RBP targets.

The new study is the first to look at the impact of mutations in these target sites across the whole genome of people with conditions such as schizophrenia, depression or autism. The team reported their results in Nature Genetics in January.

“The relationship between RNA-binding proteins and psychiatric conditions is by no means new,” says lead investigator Olga Troyanskaya, professor of integrative genomics at Princeton University. “The big difference is that the vast majority of research into RBPs was looking at mutations that affect the RBP — something that affects the actual protein.” (Troyanskaya also holds a position at the Flatiron Institute, which is a part of the Simons Foundation, Spectrum’s parent organization.)

Troyanskaya and her colleagues previously analyzed the genomes of autistic children and their unaffected relatives and found that novel mutations in RBP target sites are associated with autism.

Evaluating the impact of target-site mutations is difficult, Troyanskaya says: Some may have no effect on RBP binding, whereas others may be catastrophic. So she and her team used experimental data on the bindings between RBPs and particular RNA sequences to train a deep-learning-based model to predict how well an RBP will bind to a new sequence. This model can estimate how much any single-letter change in an RBP target site will affect RBP binding.

The team used this model to evaluate inherited variants that previous studies have linked to any of five conditions: autism, attention deficit hyperactivity disorder, bipolar disorder, depression and schizophrenia.

Pairing information about how the variants affect the heritability of those conditions with data from the deep-learning model allowed the team to “triangulate” how much RBP target site variants contribute to heritability, says study investigator Christopher Park, research scientist at the Flatiron Institute.

Mutations in the target sites for 12 RBPs appear to contribute more to the heritability of the five conditions than do mutations in regions that code for proteins, the team found.

“I was blown away,” Troyanskaya says. “I never would have predicted that it’s stronger than for common coding variants.”

Researchers suspected that RBP target sites were linked to neuropsychiatric conditions, says Gene Yeo, professor of cellular and molecular medicine at the University of California, San Diego, who generated some of the data used to train the deep-learning model but wasn’t involved in the study. But the new work makes an important contribution to the field.

“What was needed was a very large, high-quality dataset and the computational modeling to integrate that,” he says. “And I think this is one of the first papers that has done that.”

But because Troyanskaya and Park’s approach looks at all of the target sites for a particular RBP at once, there is still a long way to go toward understanding how RBP target site mutations shape the heritability of psychiatric conditions, says Jordan Smoller, professor of psychiatry at Harvard University, who was not involved in the study.

In the future, researchers should drill down into the individual mutations to see how they affect biochemical processes in the cell and ultimately contribute to the conditions, he says. “This is just the beginning of generating more interest in this class of variation.”

The model itself might also be refined. Yeo says that his data were collected from leukemia and liver cancer cells, and that RBPs could behave differently in brain tissue. Data from neurons and glial cells, when available, could enable more precise study of the link between RBPs and psychiatric conditions, he says.

To facilitate further research on RBP target sites, Troyanskaya, Park and their team have made their model’s predictions freely available in an online repository.

“It can allow you to quickly go in and see what type of RNA-binding proteins might be implicated in your disease or phenotype,” Park says.

This resource could have a significant impact on psychiatric genomics, Smoller says. “This may now become a standard component of the tool set that people consult to evaluate the functional genomic implications of risk loci for psychiatric disorders.”