Genetic underpinnings of brain activity may differ in autism 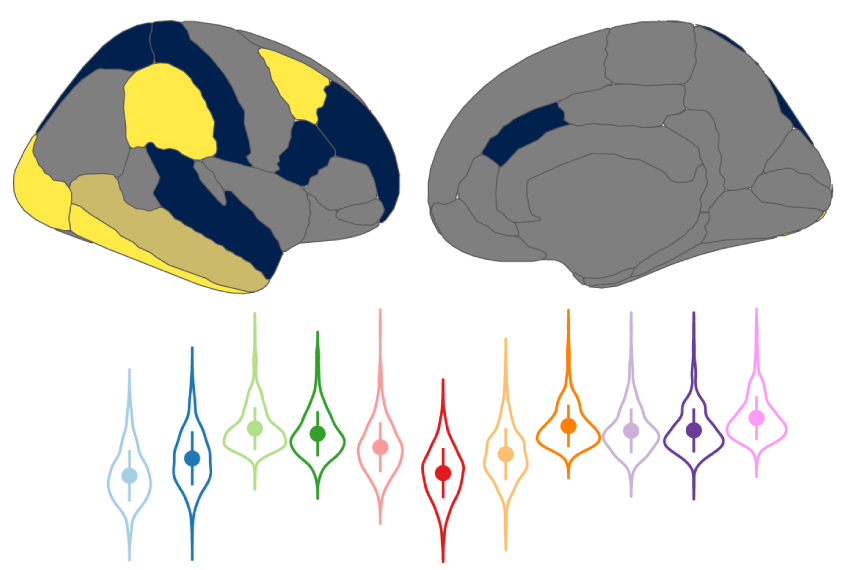 Seeing expression: Many of the genes tied to brain activity are highly expressed in the visual cortex.

The expression levels of certain genes that track with brain activity vary between people with autism and their non-autistic peers, according to a new study. Many of the affected genes code for proteins important for brain development, particularly in neurons that dampen brain activity.

Studying differences in activity-linked gene expression in the brain could help illuminate the pathways that contribute most to autism, says co-lead investigator Genevieve Konopka, associate professor of neuroscience at the University of Texas Southwestern Medical Center in Dallas.

The results are the product of an approach that compares brain activity measurements from imaging studies with gene-expression data from postmortem brain samples. The study “is one of the first to use postmortem gene expression from individuals with autism and assess how those gene-expression patterns might inform autism-relevant phenotypes,” Konopka says. Previous research using this approach found 38 genes that are associated with brain activity, 9 of which are linked to autism, but relied entirely on postmortem samples from non-autistic donors.

That gives the findings “an added level of specificity when it comes to understanding autism biology,” says Richard Bethlehem, research associate at the University of Cambridge’s Autism Research Centre in the United Kingdom, who was not involved in the study.

Konopka and her colleagues analyzed patterns of gene expression in 11 regions of the cerebral cortex for 360 people with autism and 302 non-autistic controls, aged 2 to 67. The gene-expression data came from PsychENCODE, a repository of genomic data on postmortem brain samples.

Konopka and her team then pored over functional magnetic resonance imaging (fMRI) data from a repository called the Autism Brain Imaging Data Exchange. They examined patterns of resting-state brain activity in the 11 brain regions for 1,316 people, 710 of whom have autism. The participants ranged in age from 5 to 64 and were predominantly male in both the autism group (79 percent) and the control group (87 percent).

The team identified 415 genes whose expression correlated differently with brain activity in autistic versus non-autistic people. The findings appeared in June in Nature Communications.

In the non-autistic group, the 415 genes fall into three distinct clusters: those highly expressed in adulthood, those highly expressed in early development, and those expressed at a flat rate across the lifespan. The autistic and non-autistic groups show similar changes in gene expression over time in both the early development and stable gene clusters, but autistic people show a delay in the upregulation of genes in the adult cluster compared with their non-autistic peers.

The adult cluster is enriched for genes important to a subset of inhibitory interneurons, which dampen brain activity. By contrast, the early development cluster is enriched for genes relevant to excitatory neurons, Konopka and her team demonstrated. Together, the results add to evidence for an inhibition-to-excitation imbalance in autism. Both clusters are highly expressed in the visual cortex, suggesting an outsized role for this brain area in autism, among the limited number of brain regions the researchers examined.

In general, “there’s a lot of evidence from the molecular perspective that aberrant mechanisms and developmental processes come online really early” in autism, says Jakob Seidlitz, a postdoctoral fellow at the Brain-Gene-Development Laboratory at the University of Pennsylvania in Philadelphia, who was not involved in the study. Because previous research has focused on gene expression in adult brains, “the developmental aspect of the paper was really compelling.”

The study is innovative and important, but the findings should be interpreted with caution, says Konrad Wagstyl, Sir Wellcome Research Fellow at University College London in the U.K. Despite the differences in gene-expression patterns between autistic and non-autistic people, the differences in brain activity between the two groups were small. “We need to think carefully about how neuroimaging can push forward our understanding of autism,” Wagstyl says.

Konopka and her team are expanding their analysis to include more brain regions. They also plan to use single-cell gene sequencing to pinpoint the types of cells with atypical gene-expression patterns. Evidence is emerging, for example, that astrocytes – the brain’s support cells – play an important role in autism. “If you do single-cell RNA sequencing, you can pull out the gene expression from those individual cell types,” Konopka says.