Genetic roots of sleep issues, autism may be entwined 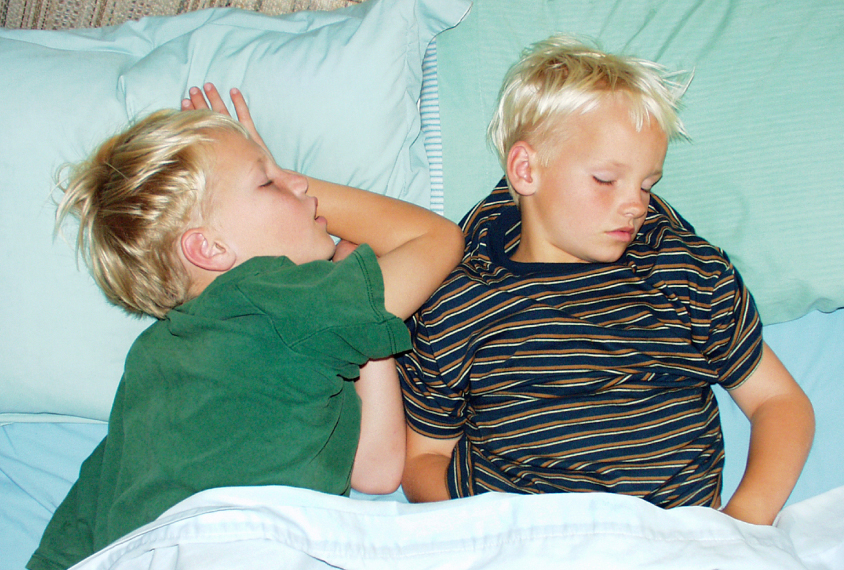 Double diagnosis: When one twin has autism or autism traits, the other twin often has insomnia, a new study shows.

The genetic factors that influence autism may overlap with those that underlie insomnia, according to a new study of autistic people and their relatives. By contrast, the two conditions show minimal overlap in environmental influences.

The results may help explain the frequent co-occurrence of autism and sleep issues, says lead investigator Mark Taylor, researcher in psychiatric epidemiology at the Karolinska Institutet in Stockholm, Sweden. Up to 90 percent of people with autism have disrupted sleep, and about 30 percent have a clinical diagnosis of a sleep disorder, according to previous research.

“This paper shows that [autistic individuals] are quite commonly diagnosed with insomnia and prescribed melatonin to help them sleep,” Taylor says. “But we are also looking at siblings and relatives in this study, and relatives of autistic people are also at a higher risk of developing insomnia.”

The strong overlap between the conditions underscores the importance of diagnosing and treating sleep problems in autistic individuals, says Philippe Mourrain, associate professor of psychiatry and behavioral sciences at Stanford University in California, who was not involved in the research.

“Sleep problems are overlooked. They are thought of as a byproduct — additional symptoms not worthy of investigating when it comes to autism,” he says. But in fact, poor sleep can impact brain development and influence the severity of autism traits.

Taylor and his colleagues used Swedish national health registries to identify 50,097 autistic people, along with nearly 56,000 of their full siblings (including 60 identical and 340 fraternal twins), 31,669 half-siblings and 214,665 cousins. They also analyzed data from 500,970 unrelated sex- and age-matched controls. They determined which participants had a diagnosis of insomnia — difficulty falling or staying asleep — or took melatonin, which in Sweden was available only by prescription before May 2021, when it became available over the counter.

About 23 percent of the autistic participants had insomnia or took melatonin, compared with 1.1 percent of the controls, the study shows. What’s more, the relatives of autistic people are also at increased odds of having insomnia; the more closely related the family member, the greater their chances are. Identical twins, for example, had about 6.6 times the usual odds of having insomnia, whereas cousins had about 1.3 times the usual odds.

A second analysis of data from 30,558 identical and fraternal twins in the ongoing Child and Adolescent Twin Study in Sweden yielded similar results: Among 423 autistic twins in this sample, about 39 percent had insomnia or had been prescribed melatonin, compared with only 4 percent of the non-autistic twins.

When one twin in a pair has autism or autism traits, the other twin often has insomnia, the team found. This trend was more prominent among identical twins, who share nearly all of their genes, than among fraternal twins, who share only half. Shared genetic factors explained 94 percent of the correlation, whereas nonshared environmental influences accounted for just 6 percent.

The results were published in July in the Journal of Child Psychology and Psychiatry.

“Finding a genetic correlation [between autism and sleep problems] confirms what we are often already seeing clinically,” says Amanda Bennett, clinical chair of the Autism Integrated Care Program at Children’s Hospital of Philadelphia. “What could really change practice someday is if we could identify genetic variations that help us predict and address these co-occurring symptoms proactively.”

Taylor’s team is examining the co-occurrence of autism and other traits with mental health conditions such as anxiety, depression, schizophrenia and bipolar disorder. Some traits, including sensory sensitivity, hyperactivity and anxiety, can contribute to poor sleep in autistic people and are genetically correlated with autism, he says — leaving open the possibility that insomnia is not directly correlated genetically to autism, but rather to other co-occurring conditions.