Genetic changes during cell splitting may lead to autism 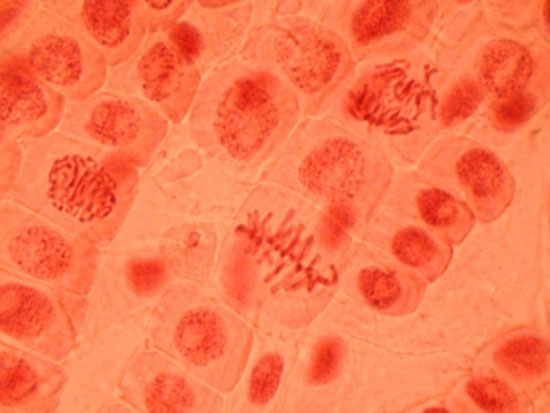 Great divide: Mitosis, the process of cell replication, may spawn DNA mutations that cause psychiatric disorders.

Great divide: Mitosis, the process of cell replication, may spawn DNA mutations that cause psychiatric disorders.

Spontaneous deletions and duplications of DNA, which appear with greater frequency in people with autism, schizophrenia and bipolar disorder, sometimes arise after conception — later than typically thought — according to an article published in the April Molecular Psychiatry1.

Large deletions or duplications of DNA, also known as copy number variations (CNVs), alter the number of copies of a gene, and may lead to brain abnormalities. De novo CNVs — which are not inherited, but arise spontaneously — are found in as much as ten percent of people with autism2.

The prevailing dogma holds that de novo CNVs arise during meiosis, when a sex cell gives rise to eggs or sperm. In the new report, Shiva Singh proposes that CNVs may also crop up during mitosis, the process of cell division that occurs throughout a person’s lifetime.

“Every time the cell replicates, it will have a possibility to create these CNVs,” says Singh, professor of molecular genetics at the University of Western Ontario. These so-called somatic mutations could accumulate across the genome and, depending on the genes involved, increase risk for disease, he says.

“Maybe we acquire [our genome], make use of it, shuffle it, reshuffle it, get the best out of it, and then pass it on,” Singh says. “It could be more complicated than we have assumed.”

Some autism genetics experts are skeptical of this hypothesis, but its backers say that it could account for the relatively high frequency of CNVs in the human genome3 and for the behavioral variability found among people with autism, including identical twins. It also raises the unnerving possibility that DNA extracted from blood samples may not reflect the true picture in the brain.

Somatic mutations are known to occur, and can lead to diseases such as cancer. But researchers disagree about how often they appear in the brain, and whether they are a significant source of mutations that cause disorders such as autism and schizophrenia.

“We don’t know the extent to which [somatic mutations] modify human health,” says Michael Wigler, professor at Cold Spring Harbor Laboratory in New York and an expert in both cancer and autism.

Others reject outright the notion that somatic CNVs play a role in these disorders, saying there is no evidence for high mutation rates during mitosis. “It’s a wild idea that we already know is not true,” says David Ledbetter, professor of human genetics at Emory University.

Even if somatic CNVs are rare, Singh counters, the countless rounds of mitosis during development increase the odds of such an error.

Singh proposed this idea to explain why, among identical twins, schizophrenia affects only one of the twins 54 percent of the time4. To explain this high discordance, scientists have turned to environmental factors such as childhood infections, or even conditions in utero, that differ between the twins; for example, twin fetuses usually feed from separate placentas.

Singh says genetic factors such as differences in gene expression or, more controversially, differences in underlying DNA sequences could instead explain the discordance.

A CNV arising in one identical twin soon after it separates from the other would cause the two to have different numbers of some genes and, potentially, different developmental paths. In support of this theory, a study last year found that up to five percent of identical twins carry a de novo CNV that the other twin doesn’t5. Singh says he also has unpublished data showing CNV differences between identical twins, only one of whom has schizophrenia.

Apart from these data, there are several lines of evidence to support his hypothesis, Singh says. For example, the number of CNVs found in the general population is higher than expected, and some of these could reflect mutations occurring anew in each individual. In fact, certain regions of the human genome are prone to creating de novo CNVs6, and brain cells in particular are more likely to acquire genetic abnormalities than are other tissues7.

For autism, the chance that only one identical twin has the disorder is estimated at anywhere between 8 and 40 percent8, but is generally lower than for schizophrenia.

The numbers depend on how autism is defined, says Joachim Hallmayer, associate professor of psychiatry and behavioral science at Stanford University, who is conducting a study in California of twins with autism.

Even when both twins meet a narrow definition of autism, there can be striking variability in the severity of their symptoms9. “You’ll find high-functioning and low-functioning, or verbal and non-verbal, in the same pair,” Hallmayer says.

Hallmayer is interested in pinpointing the genetic or environmental factors, including somatic mutations, that can account for these differences. “I wouldn’t want to exclude them,” he says.

Although no one has yet found evidence for somatic CNVs in autism, the search has been limited. A 2006 study found differences in gene expression between five pairs of twins who both have autism, but with dissimilar symptoms10. But these differences probably stem from epigenetic mechanisms — chemical modifications of DNA — that control gene transcription rather than from de novo CNVs, says lead investigator Valerie Hu, professor of biochemistry and molecular biology at George Washington University in Washington. D.C.

Because of differences in the way clinicians describe symptoms, tracking down discordant twins in DNA repositories such as the Autism Genetic Resource Exchange (AGRE) has been challenging. “We had to scour the AGRE database to find these discordant cases,” Hu notes.

Perhaps the best place to look for CNVs is in regions of the genome called low-copy repeats (LCRs), which harbor repeating sequences of nucleotides, the building blocks of DNA. During meiosis, these sequences make it possible for the maternal and paternal versions of a chromosome to misalign prior to swapping sections of DNA. This produces missing or extra DNA segments — de novo CNVs — in the resulting egg or sperm cells.

LCRs may also promote DNA replication errors during mitosis, says Singh. For example, DNA replication machinery can lose its place along a strand of repeating sequences, resulting in skipped or recopied sections of DNA that produce CNVs associated with disease11.

But even in LCR regions the mutation rate is low, occurring once in every 10,000 rounds of meiosis. The rate is unlikely to be higher during mitosis, says Ledbetter. “It’s a common, but terrible, misconception that those regions are prone to other types of genomic instability,” he says. “They’re not.”

A cluster of LCR regions on chromosome 15 produces autism-associated CNVs12 during meiosis, but “whether there’s some mitotic instability as well really hasn’t been systematically studied,” notes Carolyn Schanen, a geneticist at Nemours Biomedical Research in Wilmington, Delaware.

Schanen is studying a handful of people with autism who have duplications in chromosome 15 that argue for mistakes during mitosis. These individuals are mosaic for the duplication, meaning some cells have the extra DNA segment, but others don’t. Mosaics result only when a mutation occurs in dividing somatic cells during mitosis: daughter cells receive the genetic accident and pass it on, but unrelated cells do not.

Of the 101 people in Schanen’s study with abnormal duplications of large parts of chromosome 15, 10 are mosaic for the duplication, Schanen says.

Ledbetter argues that mosaicism is too rare for somatic mutations to be relevant to human disease. “People have [analyzed] thousands and thousands and thousands of patients with these microdeletions and microduplications, and they’re not mosaic,” Ledbetter says. Reports of mosaicism get published precisely because they are rare, he notes: “It’s that unusual and remarkable.”

There is some evidence, however, that the brain is prone to chromosomal abnormalities that are not present in blood. A 2005 study found that about four percent of cells in the brains of healthy people had the wrong number of chromosomes — nearly seven times higher than the number found in their blood cells.

Looking for somatic mutations is complicated because they can occur in any cell cycle, at any point in development, and affect different tissues differently.

“The problem with this hypothesis is that it is very hard to prove or disprove,” Wigler says. “It’s an idea at the very early stages of medical genetic thinking.”