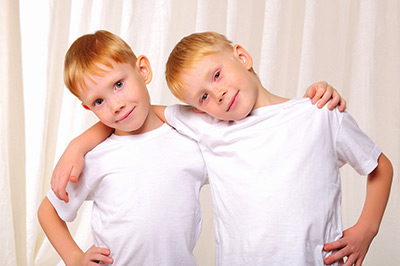 Doubling down: Data from identical twins suggest that genes play a much more important role in maintaining autism traits than do environmental factors.

Traits that typically accompany autism, such as social impairments and communication difficulties, remain largelyconsistent as children age, and this stability is primarily due to genetic factors, a new study concludes. The research, published in the March issue of the Journal of the American Academy of Child & Adolescent Psychiatry, is based on more than 6,000 twin pairs in the general population1.

The results bolster our understanding of the pivotal role that genes play in autism-like behaviors and of how these behaviors manifest themselves as children grow older. Until recently, there have been few long-term studies tracking autism’s trajectory over the course of childhood.

“We’re definitely all guilty of forgetting to study children — both children with autism and typically developing children — in the context of the fact that they’re continually growing up,” says lead investigator Angelica Ronald, a senior lecturer in psychological science at Birkbeck, University of London. “The important question for parents and clinicians is, what causes their different trajectories? What causes them to show stable patterns of behavior over time or to show change in behavior?”

Studies have shown that autism is a largely stable condition. It’s rare for children to outgrow a diagnosis of autism, and a 2012 study found that in more than 80 percent of children with autism, symptom severity does not change significantly over time2. Researchers have also studied autism-like traits, such as social aversion and repetitive behavior, in the general population, and found that these characteristics tend to remain constant as children age3.

But little research has explored why autism behaviors vary so little over the course of development. Is it because the genes that govern the behaviors are expressed stably across the lifespan? Or because environmental factors that influence the traits are constant?

The researchers tackled the question by studying more than 6,000 twin pairs drawn from the Twins Early Development Study, which includes twins born between 1994 and 1996 in England and Wales. Nearly 250 of the children have, or were suspected of having, an autism spectrum disorder, based on the results of a standard diagnostic assessment.

When the participants were 8, 9 and 12 years old, their parents completed the Childhood Autism Spectrum Test (CAST), which poses questions about whether a child exhibits autism-like behaviors, such as difficulty making conversation or a devotion to routines. Teachers completed the same screening tool for each child at ages 9 and 12.

The researchers compared each child’s CAST scores from one year to another, calculating how closely they correlated over time, a measure of stability. The closer the result of this calculation — known as the correlation coefficient — is to 1, the more stable are the traits measured by the test.

Overall, the parents’ ratings showed correlations ranging from 0.59 to 0.67, indicating ‘moderately high stability’ for autism traits. Correlations were somewhat lower for the teachers’ ratings, perhaps because different teachers completed the questionnaires for the children at different ages.

The researchers then tried to tease apart the roles of genetic and environmental factors in this stability. They did so by performing a cross-twin, cross-age comparison, comparing one child’s score on the CAST at age 8 to his or her twin’s score at age 12, for instance.

They found that for identical male twins, who share their entire DNA, the correlation between boys’ scores at age 8 and their twins’ scores at age 12 is 0.59. For fraternal twins, who have only half their DNA in common, the figure is considerably lower at 0.17. This disparity suggests that genes play an important role in the stability of autism traits.

“We’re seeing that genetic variations not only produce liability to autism but sustain it over the course of development,” says John Constantino, professor of psychiatry and pediatrics at Washington University in St. Louis, who was not involved in the study. The finding, he says, “places the spotlight squarely on the promise of continuing the pursuit of how genetic variation results in autistic syndromes.”

The study also found a small but significant role for environmental influences in maintaining autism traits over time.

Exactly what these environmental influences are remains to be seen. “These could be a broad array of things,” Ronald says. “They might be child-specific illnesses; they might be peer groups that children don’t share with each other; they could be different diets.”

The researchers also ran their data through specialized mathematical modeling software, which provided more precise estimates of how much genes and the environment affect the stability of autism characteristics.

For instance, between ages 8 and 12, parental ratings of autism behaviors in boys with the disorder showed a correlation of 0.66. The software determined that 89 percent of this stability comes from genetic factors and non-shared environmental factors account for the remaining 11 percent.

Scientists who were not involved in the study praise its large size, but Constantino says he’d like to see studies of trait stability at other ages — in toddlers and adolescents — and over a longer time frame.

Also, it’s not yet clear how well these correlations, found in the general population, would change in a sample of children with autism spectrum disorders. “That’s harder to know,” says Elise Robinson, an instructor in medicine at Harvard Medical School. “More work is needed in clinical samples to see if it applies to everyone.” Robinson has collaborated with Ronald in the past but was not part of the new study.

Even if future studies confirm the importance of genetics for the stability of autism traits, the researchers note, treatment could still improve those characteristics.