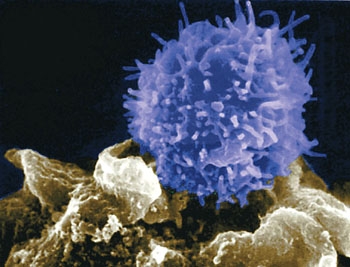 Immune markers: Genes that control T cells, like the one above, and natural killer cells are expressed at higher levels in children with autism.

A new genetic study is lending support to the notion that immune system abnormalities and some forms of autism go hand in hand.

Based on samples collected from dozens of children, California researchers found a group of 11 genes, all related to the innate immune system ― which defend the body against new viruses and other invaders ― whose expression is ramped up in autism.

Results from various autism studies, both epidemiologic and genetic, are increasingly converging on a role for the immune system, says Columbia University epidemiologist Alan Brown, who was not involved in the study. Brown’s own research suggests that prenatal exposures to germs that cause infections such as influenza and rubella can increase the risk of disorders that affect the brain.

In this latest paper, published in the January issue of Genomics, researchers studied 17 children diagnosed with classical, early-onset autism and 18 children with regressive autism, a subset of the disorder in which children appear to learn and then lose some language skills1.

Comparing the expression of the genes in these children with those of 12 typically developing children, the researchers found hundreds of genes whose expression varies along with the autism subtype.

Of these, only 11 genes were expressed at higher levels in both early-onset and regressive autism. All 11 genes control the functioning of natural killer cells, the first line of immune defense against viruses and bacteria, and CD8 T cells, which attack and kill infected host cells. The researchers are verifying their results in a larger group of children.

“It’s rare that you get a central theme to your [genomic] data,” says lead researcher Jeffrey Gregg, molecular pathologist at the Medical Investigation of Neurodevelopmental Disorders (MIND) Institute at the University of California, Davis. “It’s usually all over the place, with lots of genes.”

The study adds credence to previous results linking autism and immunity2,3. For instance, a 2005 post-mortem study that looked at seven brains of those with autism found significantly increased levels of six cytokines, small proteins that mediate inflammation, in the brains4. Others have reported changes in the relative numbers of different kinds of immune cells, including natural killer cells and CD8 T cells, or in the responsiveness of those cells.

There is also some evidence suggesting autism has an autoimmune component, meaning that the body may attack itself. Some studies, have also implicated maternal immunity5,6,7, suggesting that the immune influence in autism stretches back to fetal development.

Despite these individual pieces of evidence, there is as yet no cohesive, immune-based explanation for autism, notes Judy Van de Water, an immunologist at the MIND Institute, who was not involved in the study. But as researchers take autistic subtypes more into consideration rather than lumping all autistic subjects together, she says, some aspects of the possible links between the disease and the immune system are becoming more apparent.

In the meantime, there is no shortage of hypotheses to explain the immune’s system role.

One popular theory is that the differences in the immune system between kids with autism and typically-developing kids represent a genetic predisposition to autism. Children with autism may be more susceptible to environmental or other triggers because their immune system is out of balance, with too many of one kind of cell ― such as natural killer cells ― and not enough of another, for example.

Another possibility is that the differences are a consequence of the body’s attempt to fight autism.

A third scenario is that some common protein affects both immune and neural pathways. For example, Gregg and his colleagues found that a gene called RUNX3, which codes for a protein that regulates both the birth of new neurons and the activation of CD8 immune cells, is expressed at higher levels in those with autism.

Because the brain and the immune system develop together, Van de Water adds, it makes sense that they could be affected by the same stimuli. A study published last year in Cell suggested that the innate immune system helps shape neural connections during development8, providing yet another tantalizing piece to the puzzle.

The new study could serve as a first step toward some answers by exploring the specific roles of the genes identified, Van de Water says. “A gene array is a screening tool,” she says. “It does not tell you what went wrong somewhere, [but] it gives you a place to look.”