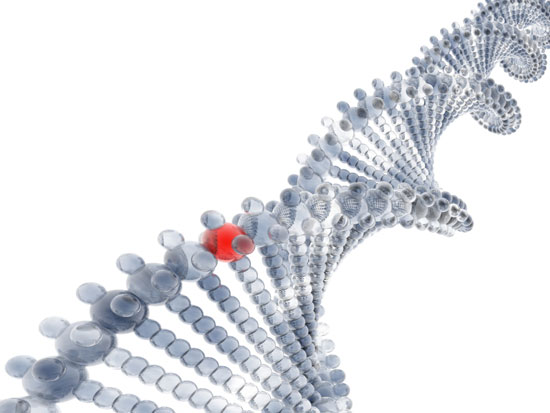 Singled out: Of the 25 genes located in the chromosomal region deleted in Williams syndrome &mdash; a rare disorder that causes developmental delay and extreme friendliness &mdash; one called GTF2I may be involved in the brain’s regulation of social behaviors.

Thanks to one charming little girl, researchers say they have pinpointed a gene that’s key to developing normal social behavior.

The 9-year-old has a unique form of Williams syndrome, a genetic disorder that affects roughly 1 in 10,000 people. One of the syndrome’s most distinguishing behaviors is an immediate, exuberant friendliness, even toward strangers.

In this aspect, Williams syndrome seems to be the opposite of autism, which is defined partly by extreme social aversion and a preference for interacting with objects over people. But the disorders are similar in other ways: people with either condition have tremendous difficulty forming long-lasting social relationships, for instance, and have cognitive deficits and high levels of anxiety.

“Both of [the disorders] are strong alterations of social behavior. Those are, I think at least in part, involving the same system,” says lead investigator Julie Korenberg, director of the Center for Integrated Neurosciences and Human Behavior at the University of Utah.

Most people with Williams syndrome lack one copy each of 25 consecutive genes on chromosome 7. The girl in Korenberg’s study is only missing 24: she carries two functional copies of GTF2I.

Unlike most people with Williams syndrome, she also does not approach strangers and is not overly gregarious — suggesting that GTF2I is at least partly involved in social behavior.

“She’s the only one in the world who’s got that exact deletion, with all of numbers 1 to 24 missing, so she is the only one where we can look at all of the effects of that gene,” says Korenberg.

Korenberg says her lab has preliminary data showing that GTF2I is expressed differently in different regions of the monkey brain. She declines to reveal more details, but does say that any gene that affects social behavior is likely to be expressed in the hypothalamus and the pituitary gland. Both of these regulate oxytocin, a hormone that’s necessary for social bonding and establishing trust.

Many lines of evidence link low levels of oxytocin to social impairments and to autism.

Genetic studies of people with autism have found variants in the oxytocin receptor that may prevent it from properly binding the hormone1; blocking these receptors in the brains of prairie voles prevents them from forming normal social attachments2.

One study found that children with autism have lower levels of oxytocin in their blood3; others have shown that giving them doses of oxytocin seems to alleviate their body rocking4 and helps them pick up emotional cues in speech5.

Researchers have only just begun to probe oxytocin’s role in Williams syndrome, but some new studies suggest that having too little or too much of the hormone may explain the opposite social behaviors of the two disorders.

“One of the things that’s wonderful about working with people with Williams syndrome is that they make you feel good,” says Korenberg, whose lab has analyzed the genomes of more than 300 people with the syndrome.

In 2001, when the girl was 14 months old, a perceptive genetic counselor called Korenberg to report her case — including characteristic facial features and a heart defect, but no developmental delay. By the time the girl was 2 years old, her caretakers confirmed that she has normal social behavior: she is shy around strangers and doesn’t stare at other people’s eyes.

When Korenberg and her colleagues mapped the girl’s genes in chromosome 7 and compared them with the same genetic region in hundreds of other people with Williams syndrome, they found that the girl has two intact copies of GTF2I, the gene at the very end of the typical deletion6.

“We know now that GTF2I is involved in some social abilities,” Korenberg says. “But we don’t know that all of the different aspects of the social behavior you see in Williams syndrome is due just to one gene.”

Others are more skeptical, saying Korenberg’s assumption is based on faulty logic.

Several other studies of Williams syndrome genetics are also based on atypical single cases, and they all suffer from the same problem, says Uta Francke, professor of genetics and pediatrics at Stanford University.

These studies don’t take into account the fact that the full Williams syndrome deletion doesn’t cause a uniform behavioral phenotype, notes Francke, who studies mouse models of Williams syndrome. For instance, some people with the full deletion also have fairly normal social behavior. “If you had a patient who’s just missing GTF2I and could show hyper-sociability, you would say, ‘Okay, this gene is important to this function.’ But we don’t have that,” she says.

Although the link between GTF2I and oxytocin or social behavior needs to be confirmed, Korenberg has patched together findings from her own and other studies to suggest a possible mechanism: if the gene is preferentially expressed in brain regions that produce oxytocin, its absence could alter the hormone’s production and explain the characteristic behaviors seen in Williams syndrome.

In 2005, Meyer-Lindenberg and colleagues conducted a functional magnetic resonance imaging study in which people with Williams syndrome were shown photographs of threatening faces. In typical controls, these pictures elicit a strong response from the amygdala, which lights up when people see something dangerous. But the amygdalae of people with Williams syndrome don’t react to the pictures7.

“It goes with the idea that they have no social fear,” Meyer-Lindenberg says.

He later found that if healthy people take oxytocin before the experiment, their amygdalae no longer react to the fear stimuli8 — making their reaction similar to that of people with Williams syndrome.

“It makes a lot of sense to think that if the amygdala isn’t reactive in Williams syndrome to social threats, that underlies their trusting hypersocial behavior. And that could be due to the fact that they make more oxytocin, or that oxytocin is dysregulated in the brain,” he says.

“You might think superficially that autism and Williams syndrome are exact opposites, and in certain ways they might be described that way,” she says. “But what’s most interesting is the ways [in which] they’re alike.”