Gene therapy for rare form of autism may treat another 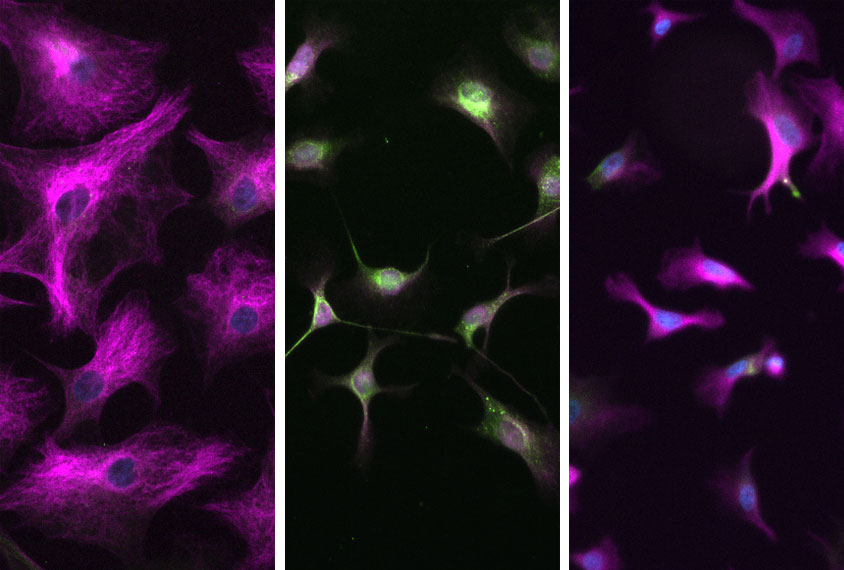 Star signs: Astrocytes from people with Pitt-Hopkins syndrome (middle) show high levels of a marker, in green, usually seen only in immature cells. After gene therapy (right), the cells show more of a mature cell marker, in purple, much like control astrocytes (left)

Increasing expression of the gene that is faulty in Rett syndrome lowers repetitive behaviors in a mouse model of a different autism-linked condition called Pitt-Hopkins syndrome, a new unpublished study demonstrates.

Researchers presented the findings virtually at the 2021 Society for Neuroscience annual meeting.

Pitt-Hopkins syndrome results from mutations in a large gene called TCF4. Because the gene is nearly 443,000 DNA ‘letters’ in length, it is difficult to deliver as a gene therapy, says Cassandra Dennys, a research scientist in Kathrin Meyer’s lab at Nationwide Children’s Hospital in Columbus, Ohio, who presented the work.

In 2018, Dennys’ colleagues learned of several people with TCF4 mutations who had been erroneously diagnosed with Rett syndrome. Each had Pitt-Hopkins syndrome but had low blood levels of the protein encoded by MECP2, the gene mutated in Rett, Dennys says.

So the researchers decided to probe whether MECP2 is altered in cells from people with Pitt-Hopkins, a first step toward testing a gene therapy that boosts expression of MECP2.

“It’s very important to us to work closely with the patients,” Dennys says. “The stories they share and insight into how their diseases manifest actually help us with research design and identifying potential therapeutic strategies.”

The researchers generated immature neural progenitor cells from the skin cells of three people with Pitt-Hopkins syndrome, each of whom carries a different TCF4 mutation: a single-letter change called a missense mutation; a mutation that shortens the TCF4 protein, known as a truncation; and a deletion of a portion of the gene.

The progenitor cells derived from all three people had low levels of MECP2 expression, the researchers found.

The team then coaxed the cells to grow into neurons and astrocytes, star-shaped brain cells that provide physical and functional support to neurons.

The progenitor cells derived from the person with the deletion had difficulty differentiating into astrocytes, the researchers found. And the resulting astrocytes had an unusual shape and retained a protein normally seen only in immature cells.

“The shape of the cell was something we’ve never actually seen before,” Dennys says. “You expect a very distinct-looking shape, and they weren’t there.”

Neurons interacting with the poorly differentiated astrocytes struggled to survive, the researchers found. Neurons cultured with astrocytes derived from the person with the missense mutation did not have that problem but did have an unusual shape, suggesting the type of mutation influences the type and severity of outcomes.

“That was one of the most interesting findings,” Dennys says. “The mutation had a very unique effect on the neurons and the differentiation potential of the cells.”

After treating the cells with a gene therapy that increases MECP2’s expression, the deficits disappeared, the researchers found.

The team then injected mice missing one copy of TCF4 with the same gene therapy. After treatment, the mice buried fewer marbles — a marker of reduced repetitive behavior — and showed fewer signs of anxiety and hyperactivity than before.

Dennys says she and her colleagues next intend to study cells with other TCF4 mutations to determine who might benefit from the MECP2 gene therapy.