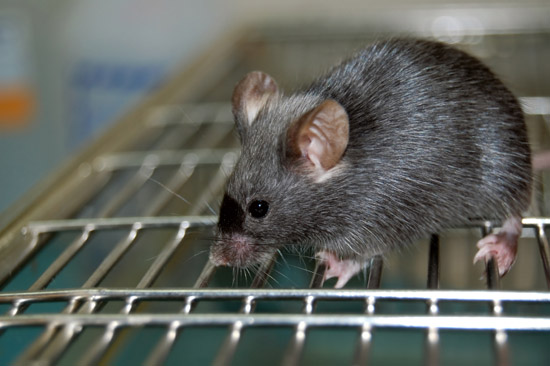 A fine balance: Mice lacking the IB2 gene have trouble socializing, are quicker to fall off a balancing rod, and do not learn as well as control mice.

Mice lacking a gene located in the chromosomal region 22q13 — which has been linked to autism — have motor learning and social deficits reminiscent of the disorder, according to unpublished findings presented in a poster session yesterday at the Society for Neuroscience meeting in Chicago.

IB2, or Islet brain-2, codes for a protein known to be expressed throughout the brain and the pancreas, which regulates digestion and hormone balance. Although IB2’s exact function is unclear, it is known to be located within 22q13, deletion of which has been reported in some cases of autism1.

“We were intrigued by the possibility that IB2 could play a role in behavior and autism-like features,” says lead investigator Mitchell Goldfarb, a professor of biology at Hunter College in New York. “In virtually every case where there’s a copy number variation or deletion in the [22q13] region, this gene gets taken out with it.”

Goldfarb and his collaborators created a mouse that lacks both copies of the IB2 gene. In a test of motor learning in which mice must learn to stay balanced on top of a rotating rod, these mutant mice are quicker to fall off the rod, the researchers found. And they do not improve at the task after four days of training, as control mice do.

This inability is not a result of motor problems: the mutant mice easily walk and explore familiar environments. But in tests of learning, in which mice are exposed to new environments, the mutant mice are generally inept, showing a “deer-in-headlights” response, Goldfarb says.

When the researchers place two IB2 mutants in the same cage, the mice spend 50 percent less time interacting with one another compared with two control mice together, suggesting that the animals also have trouble socializing.

IB2 is located a mere 60 kilobases away from the SHANK3 gene, mutations in which have been implicated in autism2. Like the SHANK genes, IB2 is expressed on the receiving end of the synapse, the junction between two connected neurons, the group found. Initial experiments also show some deficiencies in synaptic transmission in the mutants, as well as some differences in neuron shape.