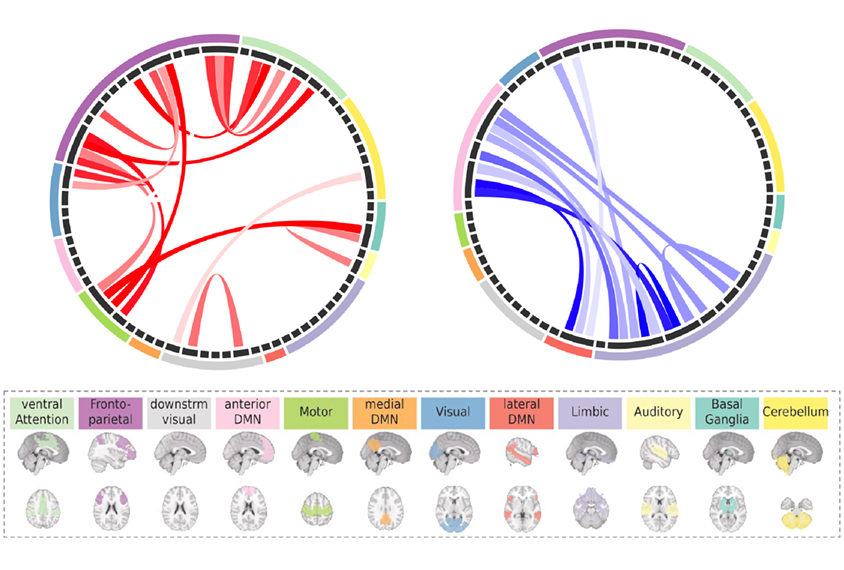 People who have large mutations associated with autism and schizophrenia share atypical patterns of brain connectivity, according to a new study, especially between areas that process sensory information. The findings offer a potential explanation for why different genetic changes can lead to the same behavioral traits, the researchers say.

The new study examined how different 16p11.2 and 22q11.2 CNVs alter the brain’s ‘functional connectivity,’ a measure of synchronous activity among brain regions.

The researchers took this genetics-first approach because past studies of functional connectivity in people with autism of unknown causes have yielded mixed results. Autistic people’s brains appear to have more functional connectivity between neighboring regions and less between distant regions than do neurotypical people’s brains. Other research shows a difference only in certain networks, or not at all, possibly because of the heterogeneous nature of autism, says Armin Raznahan, chief of the Section on Developmental Neurogenomics at the U.S. National Institute of Mental Health in Bethesda, Maryland, who was not involved in the study.

The new work shows either matching or inverse patterns of functional connectivity across people with 16p11.2 or 22q11.2 CNVs, and those who have behaviorally defined autism or schizophrenia, which differ from the patterns seen in the brains of neurotypical people and those with attention deficit hyperactivity disorder. The effects are strongest for people with a CNV.

The researchers analyzed functional magnetic resonance imaging (fMRI) scans from 101 people with a CNV; 755 people without a CNV who have autism, schizophrenia or attention deficit hyperactivity disorder; and 1,072 neurotypical controls. They collected the scans from multiple sites but applied the same analysis to each dataset.

The team divvied the images into 64 brain regions and calculated the average level of activity for each over the course of a single scan. They then assessed how well each region’s activity correlated with that of other regions.

Among autistic people without CNVs, those with functional connectivity patterns akin to their peers with CNVs have more intense autism traits: They score higher on the Autism Diagnostic Observation Schedule and lower on the Full-Scale Intelligence Quotient.

People with 16p11.2 or 22q11.2 deletions and people with behaviorally diagnosed autism or schizophrenia show increased functional connectivity between the thalamus and the sensory-motor, auditory and visual regions of the brain. That pattern may explain the sensory impairments seen in many people with autism or schizophrenia, says study investigator Clara Moreau, a postdoctoral researcher at the Pasteur Institute in Paris, France.

The sensory networks “might be more vulnerable, more easily affected by mutations,” says lead researcher Sébastien Jacquemont, associate professor of pediatrics at the University of Montreal in Canada, which could explain why two unique CNVs can have such similar effects.

The work was published in Nature Communications in October.

The overlapping effects of CNVs, such as deletions or duplications in 16p11.2 and 22q11.2, puzzles researchers, says Jacob Vorstman, associate professor of psychiatry at the University of Toronto in Canada, who was not involved in the study. “There’s this range of neurodevelopmental disorders that are all associated with the same CNVs,” but at the same time, each CNV also seems to confer some specific effects, he says.

The new study helps expand the field’s understanding of the impact of these CNVs, he says.

Jacquemont, Moreau and their colleagues also examined whether gene-expression differences might account for patterns of functional connectivity in people with 16p11.2 or 22q11.2 deletions.

The researchers plan to look next at the effect other gene mutations have on functional connectivity, with the aim of gathering enough data to link certain CNVs to alterations in brain function.