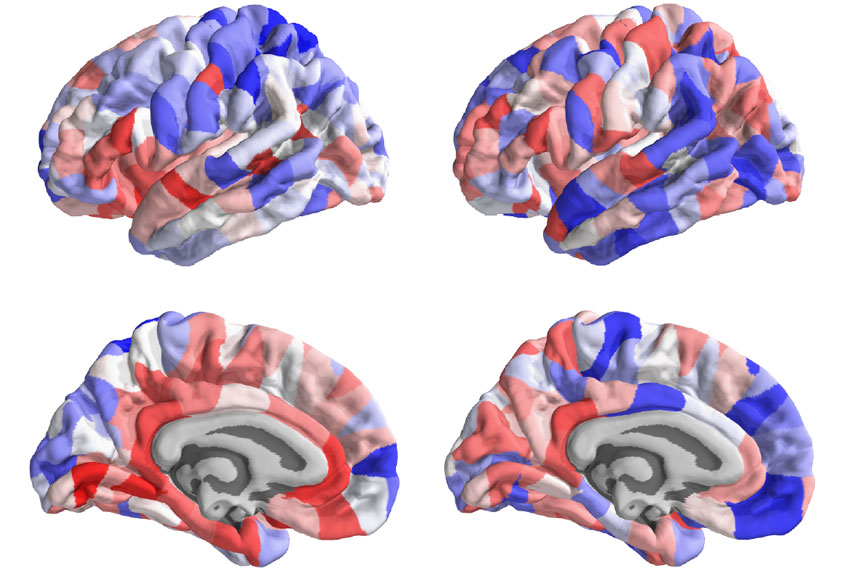 Difference mapping: The expression of certain genes tracks with the locations of brain structure changes (red and blue) in people with autism-related genetic conditions.

This article was originally published in August 2020. The authors issued a correction to their paper in November, stating that certain reported findings did not reflect their final data analysis. As a result, the link between the brain regions altered in 22q11.2 deletion syndrome and the gene-expression pattern for MAPK1-expressing cells, which we referenced here, is no longer statistically significant. We have updated the article to reflect this correction.

A new study pinpoints genes and cell types that may account for the atypical brain structure in people with genetic conditions related to autism1.

The work offers insight into how the brain develops differently in people with these conditions and identifies new potential therapeutic targets, says Mallar Chakravarty, associate professor of psychiatry at McGill University in Montreal. Chakravarty has collaborated with the researchers previously but was not involved in the new work.

The analysis considered people with six genetic conditions associated with atypical brain development, including syndromes associated with deletions in the chromosomal regions 11p13 and 22q11.2, both of which increase the likelihood of autism2.

“We used known genetic conditions as a kind of foothold into the complex biology of neurodevelopmental disorders,” says lead researcher Armin Raznahan, chief of the Developmental Neurogenomics section at the U.S. National Institute of Mental Health intramural research program.

Previous studies of mice with autism-linked genetic conditions have shown that brain structure changes tend to crop up in regions where the relevant genes are ordinarily expressed3. The same holds true for people, Raznahan and his colleagues found after comparing measurements from brain scans with existing data from postmortem brains.

Raznahan and his colleagues used magnetic resonance imaging to scan the brains of 231 adolescents and adults with one of the six genetic conditions and 287 controls. Each of the six conditions results from a deletion or duplication of a chromosome or set of genes within a chromosome.

The team focused their analyses on one hemisphere of the cerebral cortex, the brain’s outer layer. On the brain scans they split each participant’s cortex into 152 regions and measured them in multiple ways, including their thickness, curvature and volume. They then combined those measurements into a single score that reflects how dramatically the structure of each brain region differs from that of an age-matched control. They used this information to create maps highlighting the brain regions most vulnerable to structural change for each condition.

Next they compared these maps with maps of gene expression obtained from the Allen Human Brain Atlas, an online repository of postmortem data from six genetically typical human adults. The researchers ranked approximately 15,000 genes by how closely their expression maps onto the regions with the structural changes.

For each of the six conditions, the genes involved in the mutation — such as the genes missing in someone with 22q11.2 deletion syndrome — tend to have expression patterns that strongly overlap with the brain regions that show structural changes in people with that condition.

That suggests, for example, that a 22q11.2 deletion impacts the structure of certain brain regions because those regions depend on those particular genes for typical development, Raznahan says.

The team also wanted to understand why regional differences in gene expression exist across the brain in the first place. They compiled data from five previously published studies on the distribution of cell types across brain regions in human adults. These studies established the genes that multiple types of cells are likely to express.

When they compared those findings with the Allen Human Brain Atlas, they found that they could break down the gene expression maps for a typical brain “into constituent cell types,” says study investigator Jakob Seidlitz, a postdoctoral researcher at Children’s Hospital of Philadelphia. In other words, the presence of specific genes in a region tracks with the presence of specific cells.

Comparing the spatial distribution of these cell types in a typical brain with the maps of structural changes among people with a genetic condition revealed cell types that may be implicated in those changes.

The work was published in July in Nature Communications.

The data sets used in the study are mostly from adult brains, but the changes to brain structure seen in each condition are likely set in motion “early in embryonic development,” Seidlitz says.

As such, the current results are correlational, he says. The fact that they hold up across all six of the genetic conditions tested is promising, but more research is required to say exactly how the underlying cells and genes lead to the structural changes reflected in the scans.

Future work, such as studying how brain structure is affected in additional genetic conditions, will help extend their findings, both Seidlitz and Raznahan say.

“I would view this [study] as a first step, and a really important one,” says Carrie Bearden, professor of clinical psychology at the University of California, Los Angeles, who was not involved in the study.

Next, the team will need to track how development unfolds for each of the conditions to identify when different patterns of gene expression, cell type distribution and brain structure emerge, Bearden says.

“That’s really important when you’re talking about a condition like autism, where there may be a particular developmental window” for treatment, she says.