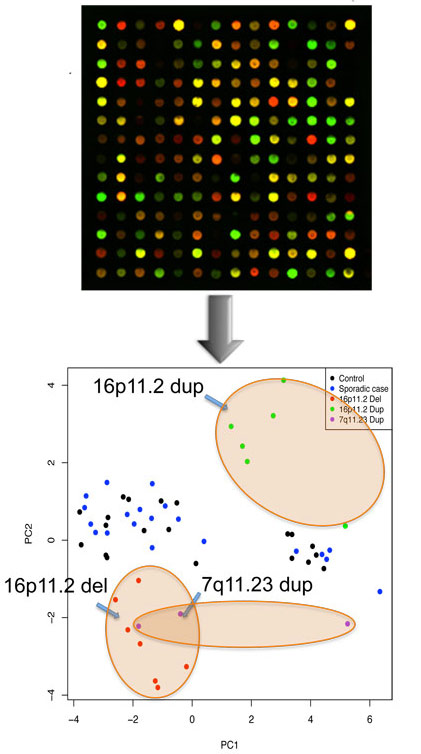 Click to enlarge image Unexpected effects: Despite what common sense would predict, deletions and duplications of the 16p11.2 region result in gene expression patterns that are not mirror images of each other.

Unexpected effects: Despite what common sense would predict, deletions and duplications of the 16p11.2 region result in gene expression patterns that are not mirror images of each other.

As researchers analyze more and more genomes for clues to human health, they are plagued with a persistent problem: How do you distinguish harmless mutations from those that raise the risk of autism?

Using blood-derived cells to analyze how mutations in people with autism affect gene expression could help resolve that problem in studies of the disorder, according to research published 21 July in The American Journal of Human Genetics1.

Daniel Geschwind and his collaborators at the University of California, Los Angeles, analyzed gene expression in 244 sibling pairs that each include one sibling who has autism and one who does not. The siblings are part of the Simons Simplex Collection (SSC), a project funded by SFARI.org’s parent organization.

In general, children in the SSC who have autism have more copy number variations (CNVs) — deletions or duplications of DNA — than their unaffected siblings. In particular, they are more likely to have de novo CNVs, those that arise spontaneously rather than being inherited from a parent. Because many of these CNVs are rare, sometimes seen in just one child, it’s often impossible to definitively link them to the disorder.

Although researchers have broadly assumed that CNVs result in corresponding changes in gene expression, studies have shown that is not always the case. Geschwind’s study is the first to examine this relationship for CNVs linked to autism.

To identify the CNVs that might raise risk of autism, the researchers looked for genes whose expression levels are two or three standard deviations above or below the mean expression level in a group, analyzing people with autism and controls separately.

CNVs that alter gene expression are more likely to have functional consequences for that individual than are those that don’t, though such a change does not prove that the CNV is a risk factor.

“What they’ve done is unmasked unique CNVs that weren’t recognized as potentially relevant in autism,” says Louis Kunkel, professor of genetics and pediatrics at Boston Children’s Hospital, who was not involved in the study. “They used CNVs to help understand expression data and vice versa.”

Autism is a brain-based disorder, so researchers should ideally look at gene expression in the brain. However, because it is not possible to obtain brain tissue from living children, the researchers used cell lines derived from a type of blood cell called lymphoblasts.

Many of the genes expressed in the brain are also expressed in blood, although the exact correlation between gene expression in brain and blood is unclear.

The researchers found that so-called outlier genes — those whose expression lies far above or below the norm — are more likely to be part of large de novo CNVs. They are less likely to be part of inherited CNVs, and are rarely part of common CNVs, which are found in more than five percent of the population.

What’s more, outlier genes detected in children with autism are more likely to be functionally linked to the nervous system than those found in controls. One example is ITPR1, which is linked to spinocerebellar ataxia, a group of diseases characterized by loss of motor coordination.

To test whether this approach can identify new risk genes for autism, the researchers looked at a handful of small CNVs that trigger large changes in the expression of genes within those CNVs.

One of these genes is TMLHE, which codes for an enzyme that helps to synthesize carnitine, a molecule essential for making energy in the body. A study published in May reported that defects in this enzyme can slightly raise the risk of autism.

The researchers also looked at the effect on gene expression in people with CNVs known to be linked to autism, most notably the 16p11.2 chromosomal region. Deletions or duplications in this stretch of DNA are linked to a range of disorders, including autism and schizophrenia. However, the deletion is linked to more severe problems than the duplication, including a greater risk of autism.

Two of the genes within 16p whose expression is most tightly linked to copy number are KCTD13, which has been linked to head size in zebrafish, and TAOK2. A paper published 10 Junefound that TAOK2 is important for the formation of dendrites, which form part of the connections between neurons2.

Common sense would suggest that the deletion and duplication of the same stretch of DNA would cause opposite changes in the expression of those genes and, in turn, of other genes in the genome. But researchers found expression patterns that are not mirror images of each other.

“There is really no overlap in gene expression between the two,” says Geschwind, professor of neurology and psychiatry. “We think this readout is very important,” he says, because it helps to explain why the deletion and duplication have such different outcomes.

The caveat for all these findings, and one that Geschwind readily recognizes, is that gene expression in blood-derived cells may not reflect expression in the brain.

“Can you take a white blood cell, attack it with a virus in a test tube, and use the way the genes act in that weird tissue as a reflection of what happens in brain?” asks William Dobyns, professor of pediatrics at the University of Washington in Seattle. “Data over the last few years suggest it’s a fair surrogate, but not a great one.” (Given the paucity of access to brain tissue, Dobyns says he prefers spit to blood.)

Geschwind says it’s possible that the findings are specific to blood cells and not relevant to the brain. But he says it’s more likely that the deletion and duplication affect completely different biological pathways, which would explain the differences in symptoms.

“This is a way of making the best of what we have, rather than wringing our hands over what we don’t have,” says Geschwind. “We want to leverage the tools we have at our disposal, imperfect as it may be.”

The fact that the approach identified CNVs with known links to autism, such as 16p, provides one level of validation, says Kunkel. He also studies expression of autism-related genes in blood cells, though he says he prefers to use whole blood rather than blood-derived cell lines.

The only way to directly validate the findings’ relevance to the brain is to analyze gene expression in postmortem brains, which Geschwind’s team has also done. But confirming the results of this study would require a much larger number of postmortem brains than are available.

The study focused on CNVs, but Geschwind says the same approach could be used to determine whether single-letter mutations are likely to cause disease.

“We know that 50 percent of nonsense mutations are likely to be pathogenic,” he says. “But we don’t know which 50 percent yet.”