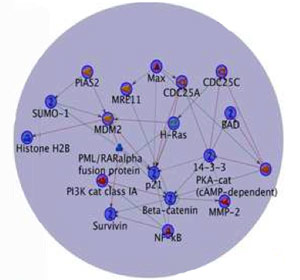 Postmortem brain tissue from people with autism shows differences in the expression of genes involved in a number of molecular pathways, including those that control cortical patterning, programmed cell death and differentiation, according to research published last month in PLoS Genetics1.

The finding might help explain the differences in brain size seen in some children with autism compared with typically developing children, says Eric Courchesne, director of the Autism Center of Excellence and Healthy Infant Development Laboratory at the University of California, San Diego, and senior scientist on the study. “This is the first really strong evidence of genetic systems that seem to underlie the early abnormal brain development in autism,” he says.

In younger brains in particular, the researchers found abnormal expression of genes that help to regulate the cell cycle, repair DNA damage, differentiate cells and properly pattern the cortical tissue.

“These are foundational processes of creating a brain,” says Courchesne. They influence the number of cells in the cortex, which cells survive and which are programmed to die, as well as the patterning of cells and their distribution across the brain, he says.

The findings are “remarkably consistent with some previously published studies,” says Daniel Geschwind, professor of neurology and psychiatry at the University of California, Los Angeles, School of Medicine, who was not involved in the study.

That’s especially important in analyses of postmortem brain tissue, because the number of samples is so limited. Courchesne’s study analyzed a total of 33 postmortem brains from people with autism and healthy controls, which is a fairly large number for this type of study. But it is still a relatively small number of samples, so it’s not yet clear how broadly relevant the findings will be.

“One of the issues with all of these studies is that the total number of brains studied is small,” says Geschwind, who has also analyzed gene expression in postmortem brains. “Therefore, there is still a big necessity to extend and validate these and other gene expression results.”

About one in five children with autism have larger-than-normal head size2, though this statistic is under some debate. Researchers have sought to explain this size difference by using brain imaging to estimate the volume of specific brain regions.

The results of these studies vary. But Courchesne and others have shown that the brains of children with autism appear to have an altered growth trajectory, for example, growing faster than the brains of typically developing controls early on and then shrinking in adolescence and adulthood3.

This pattern may be due in part to too many cells. A small study published in November, also from Courchesne’s group, found a 67 percent overgrowth of neurons in the prefrontal cortex, a brain area involved in planning and higher-order thinking4.

In the new study, researchers examined postmortem brain tissue from 15 people with autism, including 9 children (aged 2 to 14 years old) and 6 adults (aged 15 to 56), and 18 healthy controls, including 7 children and 11 adults, collected from an assortment of brain tissue banks.

They then analyzed gene expression across the genome in the prefrontal cortex, searching for genes whose expression levels were either high or low compared with controls.

By determining whether those genes fall into specific functional pathways, such as those that control programmed cell death — a mechanism for eliminating damaged, unwanted or unneeded cells, researchers identified specific pathways that vary between the autism group and controls.

Both young and old brains have abnormal gene expression levels in pathways related to programmed cell death and repair of DNA damage. Younger brains specifically have defects in pathways governing cell number, and adult brains have problems in cell signaling and remodeling pathways.

“As far as I know, this is the first whole genome study of very young autistic individuals compared to controls,” says Courchesne, meaning researchers analyzed expression of all the genes in the genome, rather than a select group of candidate genes. “Our findings suggest there is a separate pathology taking place in adult autistic brains.”

Most of our neurons are born while we’re still in the womb. Excess neurons are pared away during the second and third trimester and soon after birth until babies have the final correct number.

Courchesne says the findings suggest that the excess number of cells his group has recorded in the prefrontal cortex in people with autism is linked to both processes: cellular overgrowth and lack of proper pruning or programmed cell death.

Geschwind says he was happy to see that some of the new findings — particularly the identification of genes involved in patterning — are in line with the results of his brain tissue studies.

But he also says it is not yet clear whether the findings explain overgrowth in autism. “It’s interesting to speculate, but that’s a very big leap,” he says. “The overgrowth occurs very early, before the age of 5,” and many of the gene expression changes are seen in both young and adult brains.

Given the relatively small number of brains under study, Geschwind says it’s also unclear whether the differences between adult and young brains observed in the study are significant. “I’m not sure there are enough samples at critical junctures to actually know.”

Courchesne’s team next plans to look at gene expression in specific brain regions, such as the amygdala, an area involved in emotional processing, that imaging studies have previously shown to be affected in autism.

The researchers also plan to use the same brain tissue samples to look at how the cells in the prefrontal cortex are organized, so they can determine whether abnormal gene expression patterns are linked to the structural changes they identified in that part of the brain.