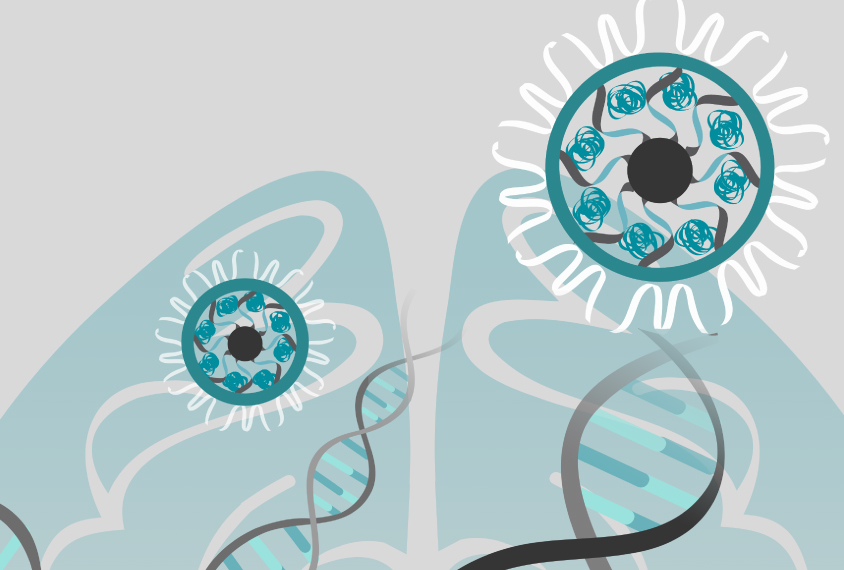 Safe travels: A fleck of gold (center) and a protective shell enable CRISPR to traverse safely into the brain.

Scientists have for the first time successfully delivered the gene-editing tool CRISPR into mouse brains and altered their behavior1.

In the method, a nanoparticle ferries the enzyme used in CRISPR into the brains of a mouse model of fragile X syndrome. The enzyme dampens a signaling pathway related to the syndrome, and lessens the mice’s exaggerated repetitive behaviors.

The results offer hope that the approach might treat fragile X syndrome as well as other conditions related to autism.

Gene delivery to cells generally involves viruses. But viruses continuously express their payload, and CRISPR can cut the genome indiscriminately. So delivering CRISPR with a virus is likely to be toxic to animals and people, says lead researcher Hye Young Lee, assistant professor of cellular and integrative physiology at the University of Texas in San Antonio.

The nanoparticle, by contrast, allows researchers to deliver precise amounts of the CRISPR complex with a one-time dose. Last year, the researchers who made the nanoparticle used it to modify a gene in muscle tissue2. In the new paper, they report that the approach edits a high proportion of brain cells near the injection site.

“Just the idea that without a viral vector you can achieve this very high targeting efficiency is really stunning,” says Antonio Bedalov, associate professor of medicine at the University of Washington in Seattle, who was not involved in the work.

Bedalov’s team is developing ways to use gene therapy to treat Rett syndrome, another condition linked to autism. “This really opens more possibilities for what we are trying to do in my lab,” he says.

CRISPR combines an enzyme that cleaves DNA with a guide RNA that directs the enzyme to its target in the genome. The researchers attached the CRISPR complex to a fleck of gold and then encased it in a protective shell. Cells swallow these particles when they come into contact with them; the shell then breaks open, releasing its contents.

The team tested the system on fluorescence genes they had introduced into mice and found it to be safe and effective. They then injected the particles into a brain region of fragile X mice called the striatum. (The striatum is involved in movement and has been linked to the kind of repetitive behaviors seen in autism and fragile X syndrome.)

The CRISPR system disables a gene for mGluR5, the target of other experimental treatments for fragile X syndrome. This treatment roughly halves mGluR5 production around the injection site. By three weeks after treatment, the mice had decreased their frantic repetitive behaviors.

Drugs that dampen mGluR5 activity have worked in mouse models of fragile X but not in people with the syndrome. It is possible that people become tolerant to these drugs, and so editing the gene might be more effective, says Hye.

An even better option, some researchers say, would be to target the syndrome’s root cause.

“It is exciting that it’s an advancement in techniques for getting the gene editing into the neurons,” says Randi Hagerman, medical director of the MIND Institute at the University of California, Davis, who was not involved in the study. “But I think they need to focus it directly on the [fragile X] gene.”

Targeting that gene, called FMR1, is not straightforward in mice, however. In people, the mutation comprises repeats of a DNA segment, which shut down production of the protein; the repeats do not have the same effect in mice.

Scientists might be able to use the new system to cut out the repeats or deliver a modified form of it that enables mutated FMR1 to be expressed, says Niren Murthy, professor of bioengineering at the University of California, Berkeley. Murthy’s team created the nanoparticle.

For now, Hye and her colleagues are trying to deliver the nanoparticle through cerebral spinal fluid as a way to reach the whole brain. This approach would be less invasive than a direct injection into the brain, she says.

The researchers are also working on targeting certain types of brain cells and replacing the gold from the particle with a biodegradable compound.