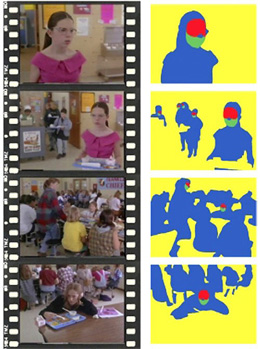 Eye, eye, sir: Contrary to expectations, girls with milder forms of autism spend less time looking at eyes and faces than those with severe symptoms.

Girls with autism carry more mutations than do boys with the disorder, and show greater differences in brain activity and response to social cues, according to several preliminary studies presented last week at the 2013 International Meeting for Autism Research in San Sebastián, Spain.

The new findings, along with the focus on the topic at the meeting, reflect a growing interest in answering the long-held question of why more boys than girls are diagnosed with autism.

It’s possible that girls are somehow protected from the disorder, or that they have different symptoms than boys and are thus less likely to be diagnosed.

“Instead of focusing on specific male risk factors, our focus needs to change to understanding how the male and female brain differ and what that means for autism risk,” says Stephan Sanders, a postdoctoral researcher in Matthew State’s lab at Yale University, who presented the genetic findings.

Some answers may be forthcoming from a new study, led by Kevin Pelphrey, that is the largest effort to date to study sex differences in autism.

In the meantime, Sanders’ observation suggests that girls need to accumulate more mutations before they manifest symptoms of autism because they are somehow protected from the disorder.

A twin study published in February found that girls with autism traits are more likely to have siblings with those traits than boys are, suggesting that girls need many genetic risk factors for those traits to become apparent.

“If we can understand why the female brain is inherently protected, then the therapeutic potential would be great,” says Sanders.

Sanders and his collaborators analyzed genetic data from 456 females with autism and 2,326 males in the Simons Simplex Collection — a repository of genetic samples from families that include one child with autism, funded by the Simons Foundation, SFARI.org’s parent organization. They found that females have roughly 1.7 times more genetic variations than boys. This is true for both copy number variants (CNVs) — deletions and duplications of chunks of DNA — and for single-letter genetic variations.

He says that this genetic difference explains roughly 20 to 50 percent of the difference in rates between males and females. Previous studies have suggested that girls with autism tend to have larger CNVs than boys. But “this is the first time the difference has been directly observed,” Sanders says.

The male-to-female ratio in autism is roughly 4-to-1 and even more skewed at the higher-functioning end of the spectrum: about 8-to-1. Conventional wisdom suggests that girls tend to have more severe symptoms than boys. However, at least some of this may reflect a diagnostic bias.

“The question is whether girls really are protected or whether it’s just harder to detect them,” says William Mandy, lecturer in clinical health psychology at University College London. “The likelihood is it’s a bit of both.”

Regardless of the cause, researchers say, it’s clear that a better understanding of autism in girls is essential to improving treatments for this group.

“A lot of what we do in research and intervention are things we have learned from researching boys, and this needs to be addressed,” says Ami Klin, chief of autism and related disorders at the Marcus Autism Centerat Emory University in Atlanta, Georgia. He points out that girls are often excluded from studies.

Klin has evidence suggesting that girls engage with their social environment differently than boys do. He and his colleagues used eye-tracking technology to look at differences in 52 boys and 13 girls, aged 7 to 17 years, as they watched videos of people interacting.

Boys and girls both seem to pay attention to the same parts of the video, including faces and eyes, he says. But when the researchers take the severity of symptoms into account, the results are quite different. Boys who are more socially disabled look less at the eyes, whereas the trend is the opposite in girls, says Klin.

“It’s one of the most surprising findings we’ve seen in our lab,” saysJennifer Moriuchi, a graduate student in Klin’s lab who presented the work at the conference. “The correlation got stronger as we added more participants,” she says.

The brains of girls with autism may be inherently different than those of boys with the disorder, according to a third study presented at the conference.

Meng-Chuan Lai, a research associate in the department of psychology at the University of Cambridge in the U.K., and his collaborators measured the degree of variability in the functional magnetic resonance imaging signal in men and women with autism and controls.

They found that among men, it is easy to distinguish those who have autism from those who do not — brains in the autism group have more random patterns of activity.

Overall, studying sex differences in autism presents a major challenge for researchers, says Lai. “How do you define groups? What criteria are used?” he says.  “Is the diagnostic criteria itself male-biased?”

These are the issues that Pelphrey is dealing with as he begins his study. Last year, Pelphrey, director of the Yale Child Neuroscience Lab, and his collaborators won a $15 million grant from the National Institutes of Health.

“Just in the first year, it’s clear to us that girls are more severely affected; so what are we missing?” says Pelphrey. “Is there a hole in the universe where girls with high IQs [and autism] are?”

The researchers are recruiting 1,000 children for the study: 500 of them have autism; 500 of them are girls. Researchers from four sites across the U.S. aim to analyze genetics, brain imaging and behavior data, as well as create induced pluripotent stem cells from all participants.

“We want to link together datasets using novel network analyses and try to discover new genes specific to girls,” says Pelphrey, who has firsthand experience with sex differences in autism. He has two children with the disorder: a son, diagnosed at 16 months, and a daughter, diagnosed at 3 years old.

The researchers also plan to study unaffected siblings, who have a 20-fold greater risk of developing autism than the general population and may carry some protective factors against the disorder.

“We are particularly interested in female siblings who have not been diagnosed with autism,” says Pelphrey. Even if they don’t show behavioral signs of autism, he says, their brains may reflect the increased risk, and perhaps show compensatory activity.