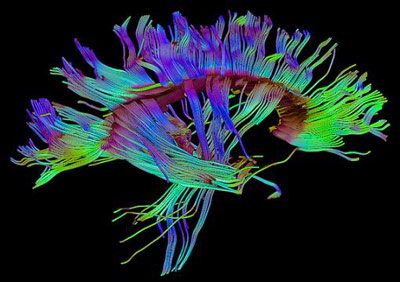 Fiber tracts: Diffusion tensor imaging suggests that girls with tuberous sclerosis show less disruption of their nerve fibers than do boys with the disorder.

Boys with tuberous sclerosis complex (TCS), an autism-related disorder, have more disorganized nerve fibers in some regions of the brain than do girls with the disorder, according to unpublished work presented Sunday at the 2013 Society for Neuroscience annual meeting in San Diego.

People with TSC have mutations in either TSC1 or TSC2, and these cause benign tumors to grow throughout the body. Many individuals with tuberous sclerosis also have autism, seizures and intellectual disability.

In the study, the researchers looked at ten boys and seven girls with tuberous sclerosis, aged 2 to 17 years. Of the group, five have autism and ten have seizures.

The researchers used diffusion tensor imaging (DTI), a technique that detects the flow of water in the brain and uses it to map nerve fibers. The measurements from DTI scans serve as a proxy for fiber integrity.

The new study scanned each participant twice, about one year apart, to track changes in fiber organization over time. The researchers focused on three pathways that connect different parts of the brain: the left and right internal capsules, the left and right cingulum bundles and the corpus callosum, which links the brain’s two hemispheres. The pathways mature at different rates, giving the researchers an opportunity to compare how the fiber’s integrity changes over time.

Interestingly, autism is not associated with differences in tract integrity over time in children with TSC. Gender, however, appears to plays a role: Boys with TSC have more disorganized tracts as they age, but only in some regions of the brain.

“The most clinically relevant finding is that we really have to think of gender as being an important factor,” says researcher Fiona Baumer, child neurology resident at Children’s Hospital Boston.

Boys with TSC show more disorganized nerve fiber tracts over time in all of the pathways measured except the right internal capsule. Girls, in contrast, do not show these deficits.

“Females tended to be developing more in the expected direction than males,” Baumer says.

It’s unclear why boys and girls show these dissimilarities, but it’s possible that they have differences in the levels of myelin, the sheath that surrounds nerve fibers and helps speed the transmission of electrical signals.

Children with seizures — regardless of gender — show more disorganization in the left internal capsule than do those who do not have seizures. This suggests that seizures affect the integrity of nerve fiber tracts during development. However, larger numbers are needed to confirm this association.