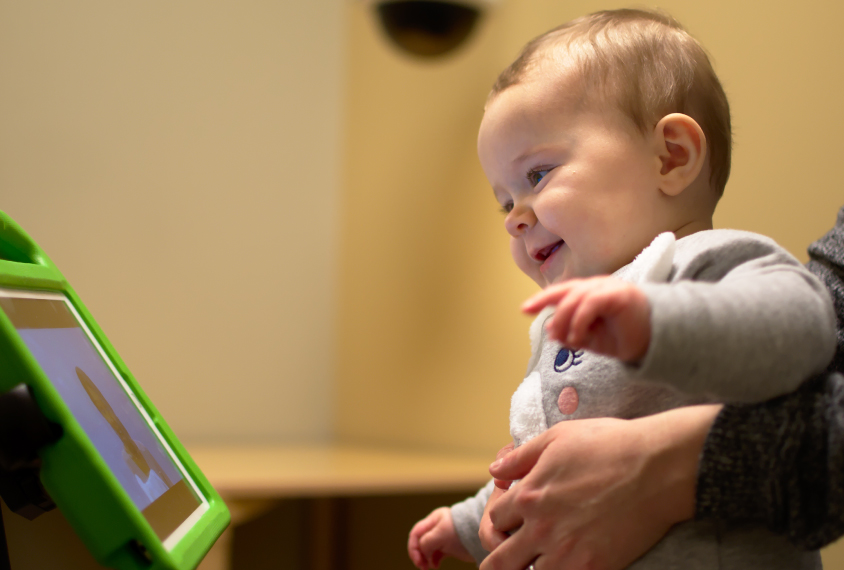 A mobile phone app that tracks a toddler’s gaze as she watches short videos can distinguish between children who later receive an autism diagnosis and those who do not with 90 percent accuracy, according to a study published today in JAMA Pediatrics.

Toddlers with autism tend to prefer to look at objects rather than people, previous eye-tracking research has shown. This same preference appears in children as young as 17 months who are later diagnosed with autism, the new study reports. The eye-gaze tracking app also showed that these children pay less attention to the flow of a conversation than their non-autistic peers do.

The app is not meant to diagnose autism but to help clinicians determine whether a child should be referred to a specialist for a formal diagnostic evaluation, says co-lead researcher Geraldine Dawson, professor of psychiatry and behavioral sciences at Duke University in Durham, North Carolina. “We’re still at the early stages in validating it,” she says.

Even at this stage, however, the tool shows promise, says Frederick Shic, associate professor of pediatrics at the University of Washington in Seattle, who was not involved in the study but peer-reviewed it for the journal.

Previous technological tools for autism screening have shown an “astronomical ability to separate groups,” but replication studies only showed modest results, Shic says. “This paper is much more mature than most studies that have come out about this.”

The mobile app, designed for iPhones and iPads, plays five short videos: three videos showing an adult playing with a toy or two adults conversing, and two control videos showing a puppy or floating bubbles. It uses the device’s built-in camera to record the child’s gaze as she watches the clips.

Dawson and her team tested the app on 993 children aged 17 to 36 months. Each test took less than 10 minutes and was administered during routine well-child visits at four primary care clinics in North Carolina.

During these same visits, parents filled out a common autism screening questionnaire. Based on those results, or if the parents expressed concerns about their child’s development, clinicians referred 79 children to specialists for autism evaluations, and 40 of them were later diagnosed with the condition.

Toddlers later diagnosed with autism spent significantly more time looking at the toys in the videos than at the person playing with them, whereas non-autistic children showed the opposite pattern, the study shows. And the autistic toddlers’ gazes did not follow the flow of the conversation as closely as the non-autistic children’s gazes did during the video of people talking.

For each individual video, the gaze-tracking analysis separated the autistic children from the non-autistic ones at a rate better than would be expected to occur by chance. The combined results from all five videos boosted accuracy to around 90 percent.

Making the app work on operating systems other than Apple’s would help make it more scalable and more accessible, Shic says. “iPhones cost a lot for what they do compared with an Android.”

A five-year study following children as young as 6 months old is underway, with caregivers conducting the tests at home on their mobile devices, Dawson says.

To hone and validate the tool, larger studies involving children of different ages, sexes and ethnic backgrounds will be necessary, she says. “We’re still at the beginning stages of this work.”