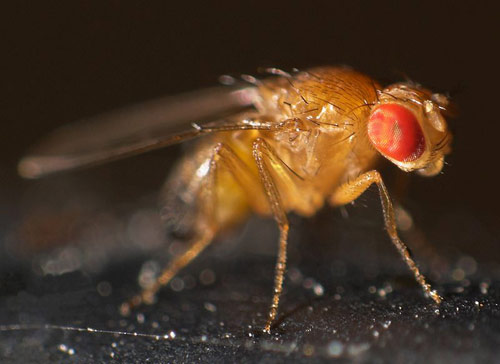 Fruitful flies: Drosophila melanogaster have simpler brains than humans do but express many of the same proteins, making them a good model for biochemical studies of autism.

Fruitful flies: Drosophila melanogaster have simpler brains than humans do but express many of the same proteins, making them a good model for biochemical studies of autism.

Looking at flies that express elevated levels of UBE3A, a gene that is duplicated in some people with autism, researchers have identified 81 proteins that may be linked to the disorder, according to unpublished results presented Tuesday at the 2011 Society for Neuroscience annual meeting in Washington, D.C.

Several of these proteins have important roles in the brain and are good candidates for autism, says lead investigator Lawrence Reiter, assistant professor of neurology at the University of Tennessee Health Science Center.

Mutations on the maternal copy of UBE3A lead to Angelman syndrome, an autism-related developmental disorder. The paternal copy of the UBE3A gene is inactivated through a process called imprinting.

Duplication of 15q11.13, a chromosomal region that overlaps with the UBE3A gene, is associated with autism. UBE3A is considered to be the most promising candidate gene within this region.

Because UBE3A’s role in the cell is to regulate the levels of other proteins, however, the story doesn’t end there, says Reiter.

“The UBE3A targets are what tie everything together,” Reiter says. “One of the major remaining issues is, what are UBE3A’s targets and how are these actually impacted?”

To address this question, the researchers looked in fruit fliesengineered to have elevated levels of either the human or fly form of UBE3A. Flies have fewer proteins than humans do, but 75 percent of human disease-associated genes have a Drosophila equivalent, Reiter says.

The researchers removed the brains from flies with elevated UBE3A and looked for proteins expressed at either higher or lower levels than in controls. They identified 81 proteins that met these criteria, which they say are all potentially UBE3A targets.

The researchers have also investigated a few of these in detail to parse out how elevated levels of UBE3A might lead to changes in protein expression.

One of these, called PEBBLE in Drosophila and ECT2 in humans, is expressed at lower levels in fly brains that have higher-than-typical levels of UBE3A compared with controls. ECT2 is involved in synaptic plasticity, the process by which neurons change in strength in response to experience1.

Two other candidates are expressed at higher-than-typical levels in flies that have elevated levels of UBE3A, the study found. This result is surprising because UBE3A’s classic role in the cell is to target proteins for degradation, Reiter says.

One of the proteins, PUNCH, or GCH1 in humans, regulates levels of the neurotransmitter dopamine2. When UBE3A is elevated, the RNA messages that code for PUNCH are six times higher than normal, the study found. This suggests that UBE3A regulates transcription of the PUNCH gene, the researchers say.

The other is alpha-5-ATPase, which helps maintain the electrical charge that allows neurons to fire and is expressed in both the cortex and the cerebellum, two brain regions implicated in autism.

“There’s a big story, or at least the potential for big story, here that says that this protein is involved in autism,” Reiter says.