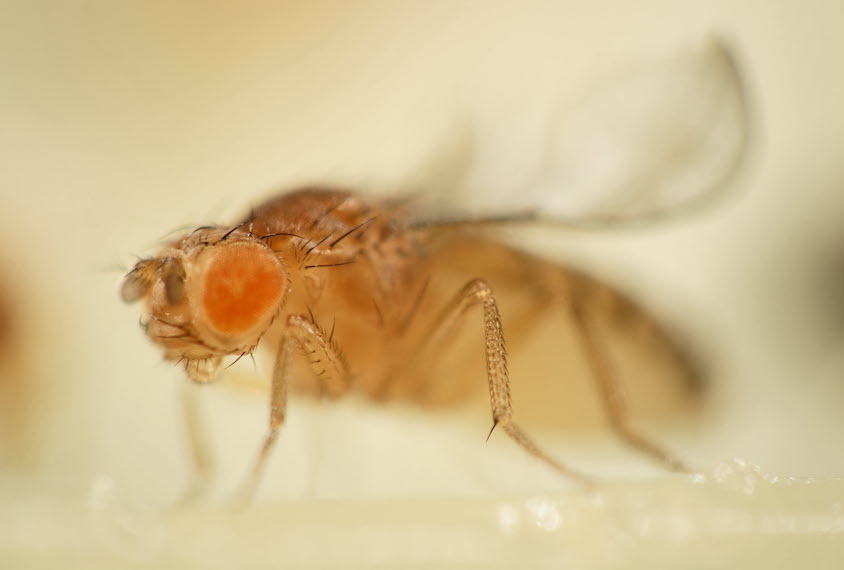 Experiments with fruit flies have enabled researchers to assess the biological impacts of dozens of rare genetic mutations found in autistic people, a new study finds.

“We are using fruit flies as ‘living test tubes’ to study which genetic variants identified in autism spectrum disorder patients have functional consequences,” says co-lead investigator Shinya Yamamoto, assistant professor of molecular and human genetics at Baylor College of Medicine and an investigator at the Jan and Dan Duncan Neurological Research Institute at Texas Children’s Hospital in Houston, Texas.

The work focused on one kind of genetic alteration that occurs more often in autistic people than in non-autistic people and is especially challenging for scientists to understand: missense mutations, in which a swap of a single DNA letter alters one amino acid in a protein.

Whereas some autism-linked genetic anomalies will clearly greatly modify the workings of genes and their resulting proteins, missense mutations “are more like misspellings that are less clear whether they matter or not,” says co-lead investigator Michael Wangler, assistant professor of molecular and human genetics at Baylor and an investigator at Texas Children’s. “These missense changes could be noise, or they could be important for autism spectrum disorder.”

Understanding the roles played by genetic variants of unknown significance “is one of the biggest problems in medical genomics and a daily challenge for our clinical colleagues,” says Annette Schenck, chair and professor of translational genomics of neurodevelopmental disorders at Radboud University Medical Center in Nijmegen, the Netherlands, who did not participate in this work. The new study “is spot-on, addressing this problem in an impressive scale,” she says.

The scientists engineered 79 autism-linked variants — most of which are missense variants — into the equivalent genes in fruit flies, or Drosophila. The variants came from the Simons Simplex Collection, a repository of genetic data from families with one autistic child. (The dataset is funded by the Simons Foundation, Spectrum’s parent organization.)

The researchers discovered that 30 of these changes had significant consequences for the flies, such as a reduction in courtship behaviors; greater or lesser amounts of grooming; smaller eyes; and smaller, crumpled, serrated, blistered or absent wings.

“The fly is an excellent tool for understanding genes,” Wangler says. “We can use tissues like the wing or eye to find how the genetic mechanisms work, and then see how those mechanisms might be at work in autism spectrum disorder.”

By using the online ‘matchmaking’ software GeneMatcher and examining human genetics databases and clinical genome-sequencing data, the researchers found an additional 13 unrelated people with and without autism traits who carry rare variants in one of the genes linked to disruptive effects in fruit flies: GLRA2, which helps control the chemical messenger glycine in the brain. These people show a spectrum of neurodevelopmental conditions, such as autism, epilepsy, developmental delay, intellectual disability, microcephaly (a small head) and nystagmus (involuntarily moving eyes).

A mutation seen in one of the people likely stopped GLRA2 from functioning in fruit flies and may have reduced communication between neurons, the researchers found. Another person’s mutation triggered the formation of dark nodules in the bodies of the insects, possibly the result of an immune reaction, and may have increased communication between neurons.

Of the 30 mutations that had disruptive effects on fruit flies, computer models previously predicted that 4 would not prove damaging and that 9 would have only moderate effects, which shows “the importance of performing experiments at the bench to study the functional consequence of missense variants,” Yamamoto says. “We hope that some of our data can be used by researchers who are developing these bioinformatic tools so their performance can be improved.”

The scientists detailed their findings March 15 in the journal Cell Reports.

One interesting finding “was the unpredictability of some of their results,” says Lawrence Reiter, professor of neurology at the University of Tennessee Health Science Center in Memphis, who did not take part in this research. For example, some variants led to a loss of function of their genes in the eye but a gain of function of those genes in the wing, he notes. In other words, not all genetic variants “are necessarily acting the same in all tissue types.”

The scientists cautioned that although these 30 mutations did have strong consequences in fruit flies, “we are not trying to claim that all 30 of these variants cause autism spectrum disorder,” Yamamoto says. Previous research estimated that 13 percent of the spontaneous, or ‘de novo,’ missense variants identified in autistic people in the Simons Simplex Collection contribute to an autism diagnosis. “We show that GLRA2 is one such promising gene, based on matchmaking and additional functional studies, but additional work is required to validate the other candidate genes and variants from our study.”

The strategy could help researchers investigate other human mutations of unknown significance, Reiter says. “They have barely scratched the surface of what is possible even for the Simons Simplex Collection,” he adds, targeting only about 11 percent of the fly counterparts to de novo mutations in that database. “This process, while still being streamlined, could be used for any large collection of human variants suspected of causing genetic disease.”