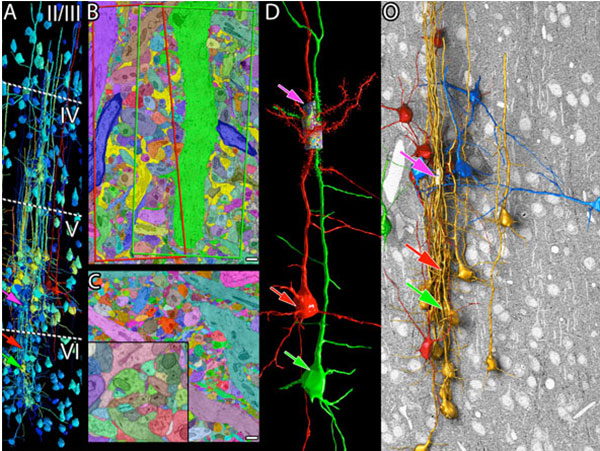 Cell scale: Researchers have traced thousands of connections in a speck of mouse brain.

Researchers have reconstructed in spectacular detail all of the complex circuits in a small piece of the mouse brain. They revealed the sublime images today in Cell1.

“There are something like a quadrillion connections in the human brain,” says lead researcher Narayanan Kasthuri, assistant professor of neurobiology at the University of Chicago. “That’s two orders of magnitude bigger than all the stars in the Milky Way galaxy.”

Kasthuri worked on the project as a postdoc in Jeff Lichtman’s lab at Harvard University. The researchers used electron microscopy to dive into a mouse brain fragment 100-fold smaller than a grain of sand. This tiny sample, part of the outer layer of the brain called the cortex, is home to 1,600 neurons interacting at 1,700 nodes, or synapses.

The resolution is so high that it reveals tiny bubbles of chemical messengers that travel between synapses. The reconstruction also lays bare the plethora of cell types in the brain and some of the miniature structures that reside within.

Other teams can use these data when looking for alterations in the brains of mouse models of autism. Lichtman’s lab is already working to reconstruct the brains of mice that lack the Rett syndrome gene, MeCP2.

“Wow” is the response from one autism researcher, Christine Nordahl, who studies the brains of people with autism. This level of resolution, she says, “is something that human neuroimagers can only dream of.”

Working at this scale requires enormous precision and patience. The researchers used a machine to slice a sample from one adult mouse brain into 2,250 sections. Each section was 29 nanometers wide — roughly one-thousandth the thickness of a human hair. The device automatically captures black-and-white electron micrographs of each section in sequence and renders the images into a three-dimensional whole.

Rainbow revelation: The reconstruction shows the intricate branching patterns of neurons in the mouse brain.


The researchers then filled in the outlines of each neuron with a unique color, allowing them to trace it as it snakes around and locks with other cells. This process is most accurate when researchers do it manually, but for the level of detail, it would have taken two people two full years. Instead, the researchers traced only some of the connections and used these decisions to train computers to do the rest.

In the process, the researchers have obtained new clues to an ongoing debate in neuroscience: when and how neurons make connections with each other.

The prevailing theory holds that once neurons are close together, they form a connection. The new study refutes this hunch, finding that proximity holds no power: Neurons that cross each other’s path only once may choose to yoke together, whereas those that criss-cross each other at multiple points may never do so.

To explore how lasting links form between neurons, the researchers plan to analyze the brain of a juvenile mouse and compare it with the young adult mouse in the study.

“No one knows exactly how neural circuits mature, and this is an important issue in the autism disorders,” says Lichtman. “One important question is whether this pattern of connections is different in young brains.”

The new technique may also reveal how connectivity goes awry in mouse models of autism at a level that’s beyond traditional methods, says Jacob Ellegood, research associate at the Hospital for Sick Children in Toronto. Ellegood has used magnetic resonance imaging to map large-scale differences among 26 mouse models of autism.

The researchers say they hope to make the technology available to all labs. Kasthuri plans to build the same automated setup at Argonne National Laboratory, a federal institute based in Chicago, to analyze brain tissue from other labs. “There are people out there with great experiments, with great theories about brains that need to be tested, and those people don’t have access to this equipment,” he says.