Fragile X syndrome can be treated in adulthood 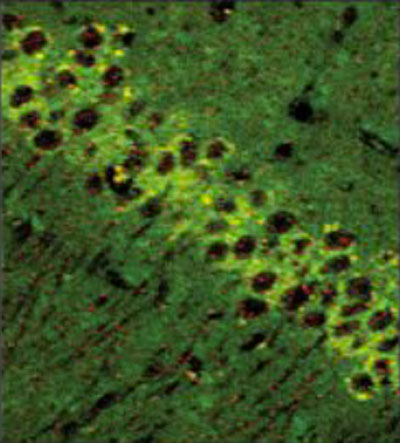 Perfect timing: Researchers have successfully delayed expression of the fragile X gene until adulthood in mice.

Activating the expression of FMR1, the gene mutated in fragile X syndrome, in adult mice reverses symptoms of the syndrome, according to a poster presented Monday at the Society for Neuroscience annual meeting in New Orleans.

The results suggest that gene therapy may be an effective treatment for the syndrome, says Deepa Venkitaramani, a postdoctoral fellow in Charles Cox’s laboratory at the University of Illinois at Urbana-Champaign.

Fragile X syndrome is an inherited disorder caused by lack of the FMRP protein. It is characterized by intellectual disability, language delay and, often, autism. Although the syndrome is considered a developmental disorder, mouse studies suggest that drugs can reverse symptoms of the disorder even in adulthood.

Researchers have been able to introduce a construct that expresses large quantities of FMR1 in mice lacking the gene. But with this method, FMR1 is not regulated as it usually is, and too much FMRP protein leads to unpleasant side effects, says Venkitaramani.

In the new study, Venkitaramani and her colleagues used a mouse strain that has a reversible mutation in FMR1. The cell’s own copy of FMR1 is silent at birth, but researchers can later activate it. They can also fine-tune the process that turns on the gene, so that FMR1 is expressed at normal levels.

The researchers photographed neurons in these mice using a technique that allows them to locate the same neuronal junctions at a later date.

At 2 months, the mice have abnormal dendritic spines, the signal-receiving branches of neurons, the researchers found. Two months after FMR1 expression is restored, the same neurons look like those of controls.

Venkitaramani plans to use the microscopy technique to screen for drugs that can treat fragile X syndrome. The researchers are also engineering a virus that can deliver the FMR1 gene to the brain, she says.