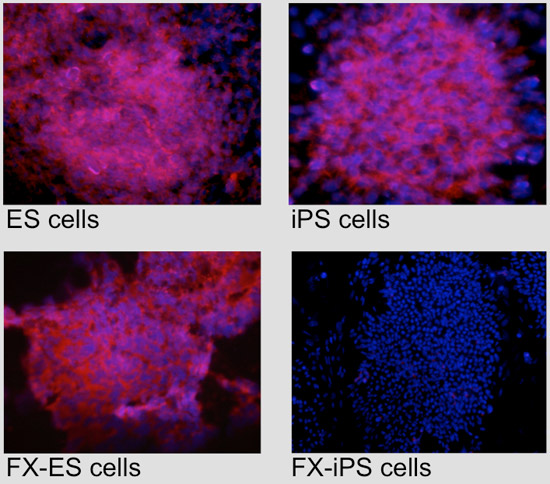 Image courtesy of Ori Bar-Nur Silent type: The gene that causes fragile X is turned on (pink) in embryonic stem cell models of the syndrome, but inactivated in induced pluripotent stem cell models.

Not all stem cells are created equal, a string of new studies suggests: adult cells that are reprogrammed into stem cells carry chemical remnants of the tissue from which they originate, making them distinct from embryonic stem cells. These differences may have important implications for studying fragile X syndrome and other diseases that arise from epigenetic glitches.

Embryonic stem (ES) cells can be derived from human embryos, and have the potential to give rise to any type of cell in the body. Induced pluripotent stem (iPS) cells are, in contrast, created in the lab by placing adult cells — typically skin, muscle or blood — in a soup of chemicals, and reversing them into an undifferentiated state.

When a Japanese team first debuted iPS cells in 2006, many researchers became hopeful that the cells could be used to model diseases just as well as their polemical counterparts, ES cells. Several groups are using iPS cell models to screen drugs for various diseases.

Two reports published on 19 July, however, found that iPS cells in mice are not in a fully reset state1,2. Rather, these reprogrammed cells retain epigenetic markers — chemical add-ons to DNA — of the differentiated tissue from which they originate.

This suggests that ES cells might make the best models for disease genes influenced by epigenetic tweaks, such as DNA methylation, a mechanism by which methyl groups attach to DNA and effectively shut off a gene.

The findings have already proven to have consequences for fragile X syndrome, an autism-related disorder caused by hundreds of repeated DNA segments in the FMR1 gene. The mutation causes FMR1 to be methylated and silenced.

In May, George Daley and Nissim Benvenisty reported that the gene that causes fragile X syndrome, FMR1, is active in ES cells, but shut off in iPS cells3.

“This is the paper that really says we have to take a bit of pause and realize that for certain conditions, embryo-derived cells may in fact have advantages,” says Daley, director of the stem cell transplantation program at Children’s Hospital Boston.

Three years ago, Benvenisty’s team had made a cell line from a male human embryo that naturally carried the FMR1 mutation. The researchers found — much to their surprise — that these cells carry an active form of FMR14, and the gene is silenced during subsequent differentiation of the cell.

In the new work, Benvenisty and Daley collaborated to compare ES cells and iPS cells derived from individuals with fragile X syndrome. The researchers made iPS cell lines from lung cells of a 22-week-old fetus and skin cells from a 4-year-old boy and a 28-year-old man.

Unlike ES cells, iPS cells from these individuals carry a silenced and highly methylated form of FMR1, the study found.

“The fragile X gene seems to somehow evade iPS reprogramming,” says Benvenisty, professor of genetics at the Hebrew University of Jerusalem. For disorders that are epigenetically regulated, he adds, “we should compare ES cells and iPS cells, just to be sure that what we’re seeing is correct.”

Others point out that because ES cells carry the mutated form of FMR1, but the gene is not yet silenced, they could serve as a good model for early development of the disease.

“One of the remaining mysteries of fragile X is exactly why this locus gets inactivated in response to expansion of the repeat,” notes Stephen Warren, chair of human genetics at Emory University, who studies fragile X syndrome. “It hasn’t been fully worked out, or even mildly worked out, partly because we haven’t been able to model it in mice or other experimental organisms.”

Until March, a federal ban severely restricted ES cell research in the United States. In addition to the ethical considerations, the use of ES cells is limited because they can only model relatively simple genetic diseases.

In contrast, “the iPS approach allows you to take essentially any patient and turn their skin cells into stem cells,” Daley says.

In 2008, he reported the creation of iPS cells from individuals with 10 different diseases5. Since then, his lab has modeled an additional two dozen diseases, he says.

Research on iPS cells has, however, been dogged by contradictory findings about whether they exactly mimic ES cells. For example, a study published 6 August in Cell Stem Cell found identical gene expression patterns in both iPS and ES cells6.

In contrast, in the 13 May Nature, researchers compared genetically identical mouse ES and iPS cells and found that a few genes are expressed differently in iPS cells7. In the two June papers, researchers discovered that iPS cells behave differently depending on what kind of tissue they are derived from. In one study, published in Nature, Daley and his colleagues made iPS cells from mice with thalassemia, a genetic blood disease. The researchers repaired the gene defective in the disease, and then tried to differentiate the reprogrammed cells into healthy blood cells. They found it is much easier to create blood cells from iPS cells derived from blood rather than from skin.

The differences identified in the fragile X study could also have important implications for treating the disease. For example, Benvenisty’s team is searching for compounds that might keep FMR1 in its active state, or reactivate the gene after it has been silenced. “For some reason, this gene is recognized upon differentiation, and becomes inactive. We’re trying to see how to control that,” he says.

Although scientists cannot study the silencing mechanism of FMR1 in iPS cells, the cells may prove useful in other ways. For instance, scientists could differentiate them into neurons to explore how the mutation wreaks havoc in the brain.

Benvenisty, whose group is trying to do just that, says the approach may be particularly useful for understanding the wider autism spectrum, because neuronal abnormalities often show more consistency than genetic roots.

“Ten years from now, probably all major genetic disorders, and even many of the rare ones, will have models in embryonic stem cells, and for sure in iPS cells,” he says.

Ricardo Dolmetsch‘s team at Stanford University is making neurons from iPS lines derived from skin cells of people with autism.

“I think that iPS cells are likely to be slightly different from ES cells, but it is not clear to me if this is a problem or not,” Dolmetsch says. In his preliminary work, neurons made from iPS cells look and act similar to those identified in mouse models of the disorder, he says. “So, at least in our case, differences between iPS cells and ES cells may not matter.”