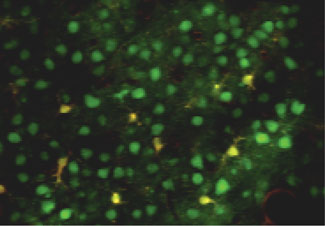 Well-lit: Neurons in the cortex of fragile X mice fire in synchrony, an abnormality that may be linked to cognitive and sleep symptoms seen in people with the disorder.

The findings might help explain sleep and memory problems in people with the disorder.

Individuals with fragile X syndrome have intellectual disability and often show symptoms of autism. The genetic disorder is caused by a dysfunctional version of the FMR1 gene.

Neurons from people with fragile X syndrome and from mice lacking FMR1 have abnormally long and immature dendritic spines, the neuronal branches that receive signals from neighboring cells. But there has been relatively little study of how these cellular abnormalities translate into changes in brain function.

In the new study, researchers recorded neuronal activity in the brains of young mice while they were either alert or sleepy. Using a method called two-photon calcium imaging, the researchers can simultaneously track the activity of more than 100 nerve cells, which fluoresce green when they fire.

In newborn mice, neurons in the cerebral cortex tend to light up in synchrony: If one cell spontaneously fires, many other nearby cells are likely to do so as well. But this pattern diminishes in the second week of life, as neural pathways become more specialized and respond to different stimuli.

The researchers also measured the activity of individual nerve cells.

This firing has two overall patterns: When mice are awake and alert, their neurons show rhythmic bursts of firing called fast oscillatory activity. When they are asleep, their neurons show ‘up’ and ‘down’ states, toggling more slowly between being ready and not ready to fire.

Fragile X and control mice spend about the same amount of time in each brain state, the researchers found, and their neurons fire at similar rates during fast oscillatory activity.

But brain activity in the mutant mice is abnormal when they are sleepy. Their neurons fire about three times as often during up and down states as those of control mice. What’s more, neuronal firing is more synchronous than in controls at these times.

The study is the first to show neuronal firing differences tied to a specific brain state, such as sleep, in a model of intellectual disability, says J. Tiago Goncalves, who did the research as a postdoctoral fellow in Carlos Portera-Cailliau’s lab at the University of California, Los Angeles.

The new findings are in line with studies showing that neurons in fragile X mice are more excitable than those of controls. But the new study collected data under more realistic conditions, and from unanesthetized rather than anesthetized mice.

If the brain is overactive during sleep, this may contribute to the sleep problems often seen in people with fragile X syndrome, Goncalves says.