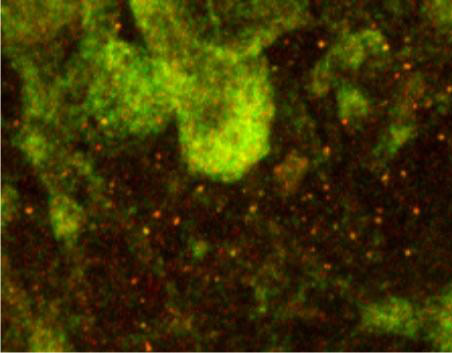 Newly discovered clusters of proteins in the brains of mice might help researchers understand how connections between neurons go awry in disorders such as mental retardation and autism.

Research on fragile X syndrome can serve as a gateway to understanding autism because the two disorders share genetic, cellular and clinical characteristics, notes Justin Fallon, professor of neuroscience at Brown University in Providence, Rhode Island, who led the study, published in the February Journal of Neuroscience 1.

“Now we want to see if we can link the disorders in a common molecular pathway,” Fallon says. “We’re not there yet, but that’s certainly where we’re very excited about going.”

FMRP is scattered throughout the brain, making it difficult for scientists to silence the protein in experiments. In contrast, the fragile X granules are localized clusters of FMRP, which could prove useful in treatment studies for both fragile X and autism, researchers say.

Scientists first observed a clinical link between fragile X and autism in the 1980s, and within that first decade, about 15 percent of males with the syndrome were also diagnosed with autism2. Equipped with more diagnostic tools, researchers now estimate that one-third of all children diagnosed with fragile X also have some form of autism.

In some respects, fragile X syndrome has been easier to study than autism because it is caused by the silencing of a single gene — FMR1, which codes for the FMRP protein. Following the discovery of FMR1 in the 1990s, researchers eliminated the gene in mice to create a model of the syndrome. Later studies found that these mice show autism-like behavior.

Scientists are using the models to unravel brain mechanisms underlying both disorders. For instance, growing evidence suggests that defects in synapses — the connections between neurons — could underlie deficits in both.

Researchers are also relying on mouse models of fragile X to explore potential treatments for both conditions. For instance, a study published in the March issue of Neuropsychopharmacology showed that long-term treatment of fragile X mouse mutants with alpha-tocopherol, a vitamin E–like compound, reverses some learning and behavioral deficits associated with both fragile X and autism3.

Fallon’s team first noticed the fragile X granules in 2005, thanks in part to a vegetable steamer. The group initially used the steamer to see FMRP with greater clarity: they thought the steam would break up chemical bonds formed in the tissue, uncovering the FMRP proteins underneath. Unexpectedly, it also helped loosen a dense thicket of proteins that had been covering the granules.

At first, the researchers thought they were seeing an aggregation of antibodies — a well-known artifact of staining. But a series of control experiments found granules only in particular brain areas, including the frontal cortex and the hippocampus, which are involved in learning and memory.

The researchers then looked at the slices to track the presence of granules in brains at different developmental time points, such as 15, 30 and 60 days after birth.

In humans, synapses undergo rapid development in the first six months after birth. In mice, this development happens around postnatal day 15, the same time that Fallon’s team saw a peak in fragile X granule density.

This finding, together with other work showing deficits in neuronal connections during this time period, suggests that the granules play an important role in the formation or maintenance of synapses, says Kim Huber, associate professor of neuroscience at the University of Texas Southwestern Medical Center in Dallas, who was not involved with the study.

“The study is interesting because it showed this early developmental and [granule] expression, suggesting a role for FMRP in synapse development,” she says.

Interestingly, other genes linked with autism, such as neuroligin, neurexin and SHANK3, also facilitate signaling between neurons, in a way that is not yet clear4.

Fallon says studying the granules’ precise role at the synapse is likely to provide clues that genetic screens don’t pick up regarding the underlying etiology of fragile X and autism.

“Genetics has been silent on where and when these genes work,” Fallon says. “What we need to do now is think about [the disorders] neurobiologically. What are these proteins doing? When are they working?”

Fallon’s group is working out ways to selectively delete the granules in cell culture and determine their function in mouse models. Developing the mouse mutants necessary for this work is likely to take up to two years, he says.

Most studies using FMR1 knockout mice as models of fragile X have found that the deletion causes increased levels of social anxiety, reduced social interaction, hyperactivity, and deficits in some forms of learning5.

But mouse models of fragile X don’t always yield consistent behaviors, notes Sheryl Moy, associate professor of psychiatry at the University of North Carolina in Chapel Hill. In tests of social behaviors, anxiety and learning, the mice have shown a spectrum of deficits ranging from nil to moderate; what’s more, the effects in mice are generally less severe than those seen in humans.

One reason for the diverse phenotypes may be that the mutants are made from mice of different genetic backgrounds.

“These different background genotypes could confer greater resistance or susceptibility to the detrimental effects of alterations in FMR1,” she says. The spectrum of behaviors is similarly diverse in children with fragile X syndrome, she adds.

Although the differing phenotypes could be problematic for establishing consistent models of autism, they could be also be an asset by allowing researchers to study how a mouse’s genetic background affects the severity of its symptoms, Moy says.

The mouse’s genetic background may also affect its response to treatment. For the particular strain of mutant mice that were treated using alpha-tocopherol, that effect was surprisingly robust.

“We repeated the experiment more than 20 times, because we were so surprised,” says Yolanda de Diego Otero, a researcher at the IMABIS Foundation in Malaga, Spain, and lead author of the study.

Alpha-tocopherol is thought to alleviate oxidative stress — an imbalance of certain cell metabolites that underlies diseases such as diabetes and Alzheimer’s — in the brains of mutant mice. de Diego Otero’s group has unpublished results adding to the evidence that molecular signs of oxidative stress are present in greater amounts in people with autism than in healthy controls.

The group is trying to extend the mouse findings to people with fragile X syndrome in a pilot clinical trial.

If all goes well, they plan to test the therapy in people with autism, which may prove more challenging because of the condition’s heterogeneity.